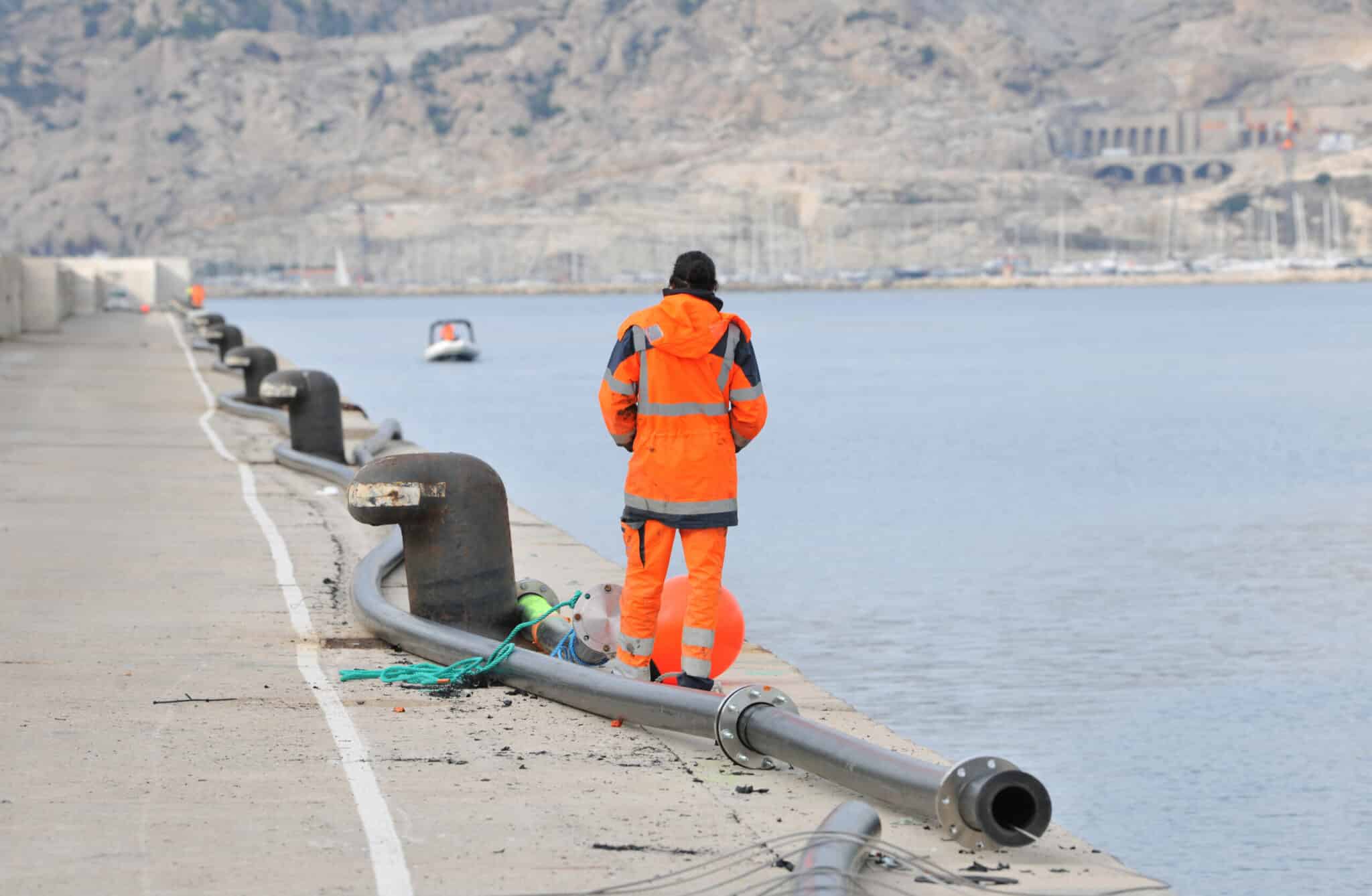 The 45,000 km-long 2Africa cable has just been connected to the Port of Marseille. Initiated by Meta, the longest cable in the world will connect 33 countries on 3 continents; Africa, Europe and Asia, representing 3 billion people, when it is fully operational in 2024. The installation in Marseille follows successful installations in the ports of Genoa and Barcelona earlier this year. Digital Realty (formerly Interxion) is hosting the termination equipment in its data centers in the port of Marseille.

This is the 16th submarine cable deployed in Marseille. But this one has the specificity of being the longest in the world. At 45,000 km, more than the circumference of the Earth, the 2Africa submarine cable aims to transform the digital ecosystem in Africa, Asia, and Europe and revolutionize connectivity in Africa.

The 2Africa consortium is initiated by Meta and involves several different members including Vodafone, Orange, ASN, and China Mobile.

The first discussions around the project date back to 2018 and the contract was signed in March 2020. Since January 2022, installation operations have been underway with Djibouti, Genoa (Italy), Barcelona (Spain), and now Marseille (France). 45 landing stations are planned along the route. When it is fully commissioned in 2024, 33 countries will be connected, representing 3 billion people, 36% of the world’s population.

The cable, which looks like a large garden hose, was installed at sea in Marseille last Sunday by a cable ship. We were able to see it in its pulling chamber buried in the port of Marseille. It is then connected to a land cable that will connect it to the termination equipment inside Digital Realty’s data centers.

At a press conference at Digital Realty’s offices in Marseille, Cynthia Perret, 2Africa Cable Program Manager for Meta, told us what’s at stake with this new cable:

“This is the longest cable project ever undertaken with a capacity of 180 terabits/s which is more than has ever been installed around Africa. This cable aims to revolutionize access to the digital world for all African countries. This project will increase the capacity, quality, and reliability of international digital bandwidth for African countries. We are also on an open cable partnership system. The goal is not to be in closed markets, but we must set up a competition between ISPs in different countries, to lower the price of bandwidth and make access to international data easier and cheaper for the user, to continue to develop the digital ecosystem.”

The stakes for Africa are huge. Many African countries have no submarine cable or old ones like SAT-3 that are almost saturated. When they go down, countries are cut off from the world. Cable failures happen near the coast, repair times are several weeks and during this time, the country has reduced bandwidth. This was the case in Mauritania, the ACE cable was cut and the country was isolated for several weeks.

“For example, there are 730 repeaters, which are cylinders installed in-line on the cable to amplify the signal along the route. There are also 50 branching units, which are the exit ramps from the trunk of the 2Africa cable to attenuate the cable for the different countries where it will be installed.”

“The reconfigurable branching units bring flexibility. When one country is cut off, we can configure the system so that traffic that goes through that country to another is not completely lost. This was not possible before. If country 2 went down, traffic between country 1 and country 3 was lost. We have removed a point of weakness from the network because we can reconfigure the traffic without having to transit through all the countries on the coast. This exists with terrestrial cables but it was complicated for submarine ones as they must resist underwater for 25 years. Now, this allows for a more reliable, safer, faster internet which will enable the development of more digital ecosystems, telemedicine, public services…”

Services that were not available are now possible. Many African countries will be connected for the first or second time, such as Somaliland, Mozambique, the DRC, or Congo Brazzaville.

“Today, the African countries that concentrate the most cables in Africa are Egypt, Kenya, South Africa and Nigeria. This represents 80% of the incoming and outgoing flows between Africa and the rest of the world. Without infrastructure, there is no exchange. With 33 countries, it’s a game changer.”

The 2Africa cable also features other innovations such as SDM1 (spatial division multiplexing) technology, which allows for 16 fiber pairs to be deployed compared to eight in similar cables.

“We have deployed a cable with a new type of conductor on the entire Mediterranean part (Egypt, Italy, Spain, France). Until now, submarine cables have used copper to power the cable and repeaters. We worked with ASN to develop cables with an aluminum conductor to diversify for cost reasons and because this conductor will allow us to increase the number of fiber pairs.”

An optical switching technology allows for better bandwidth management. And the cable will be buried deeper, 1,500 meters deeper, than usual to prevent boats from cutting them.

“The new cable technologies significantly reduce the latency time to a number of milliseconds per datum to get from point A to point B. We have the high-speed train effect, it feels like Nouakchott is in the suburbs of Marseille. With 180 Tbits/s, compared to previous cables that were around 3 or 4 Tbits/s, it is like going from a forest road to a 2 x 4-lane highway. Marseille’s ambition is to facilitate the connection in order to concentrate all these highways and prepare for the 8-lane highways of tomorrow.”

But for Cynthia Perret, the power of a cable is relative.

“Cables are designed according to needs. We have cables that meet very high capacity needs, for example, transatlantic cables where we have 16 pairs of fibers with 20 Tbits/s per pair. And we have connectivity cables, which is the case of the 2Africa cable, where the bandwidth requirements are less important but connectivity is key. It’s still a cable with a lot of capacity. There is always a cost/capacity ratio when designing a system. The longer the system, the more optical constraints there are. This means we have to choose between a lot of capacity per fiber pair which is more expensive or a little less traffic but more cost-effective.”

When asked during the press conference, consortium representatives Meta, Vodafone, and ASN were silent on the total investment. Some figures circulating on the Internet mention 1 billion dollars. Fabrice Coquiot gave us an idea of the investment for a single transatlantic cable which is around 150 million dollars.

Security issues around undersea cables are becoming major as acts of sabotage multiply. Last month, several acts of vandalism affected the global Internet. First, the Shefa-2 submarine cable was broken twice within a few days, first between Shetland and the Faroe Islands, then between Shetland and Scotland.

The same month in Marseille, a land site belonging to Free and SFR ensuring the connection of maritime cables was vandalized, creating nearly 5,000 Internet access failures in 24 hours.

“The port is a place that is monitored 24 hours a day every day. This is a very strong factor for operators.”

“If we prevent data from going left, it will go right. That’s why it’s important for Marseille to have a multitude of cables. The more cables there are, the more diversity there is, the more security there is. If we look at what happened with the Nord Stream gas pipeline, there is only one pipeline. If it is sabotaged, gas will no longer flow. The data, whether it is land or sea, still flows. Everything would have to be cut off at the same time. Europe is extremely connected on all coasts, especially Marseille.”

6 other cables are planned for the city in the next few years.