How to Better Inspect Nuclear Facilities? 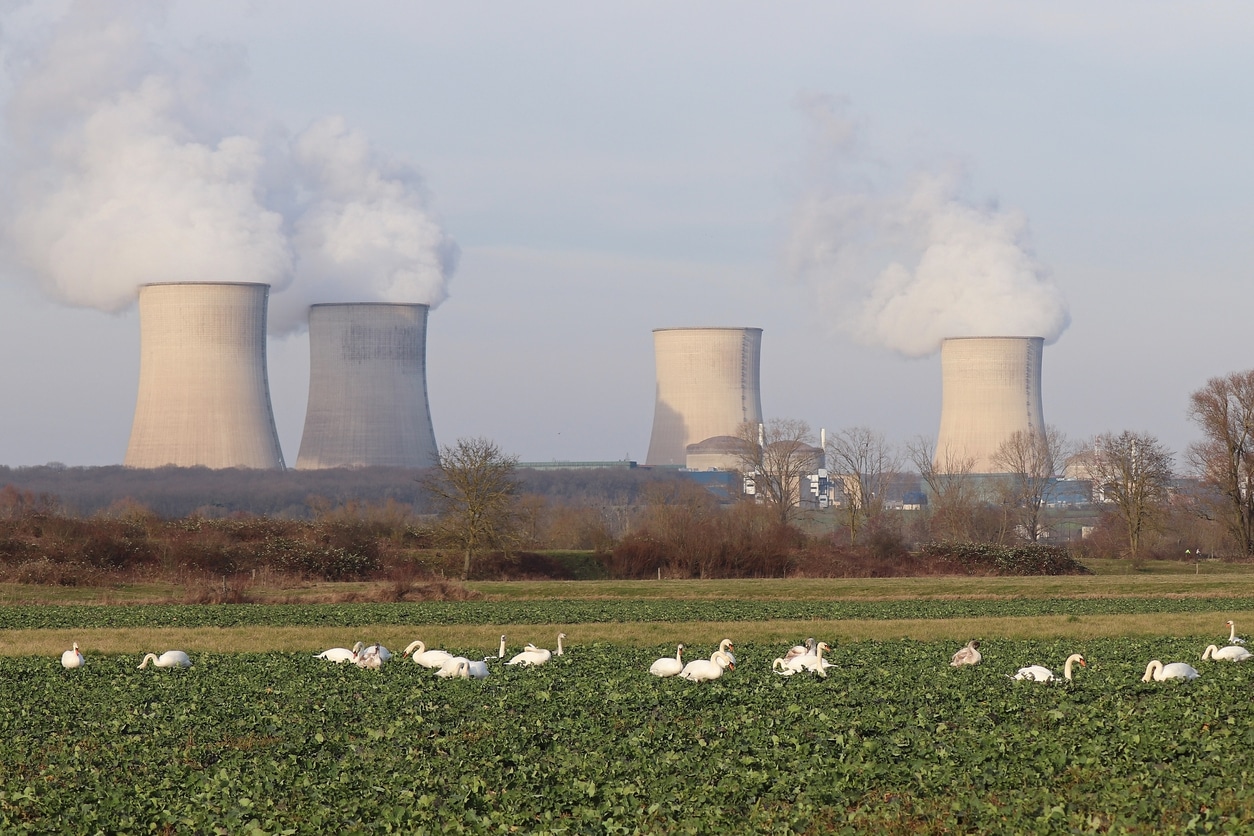 France has 56 nuclear reactors that produce 70% of the electricity consumed in the country. Although the French network of nuclear plants is considered one of the safest in the world, corrosion problems have recently been detected on parts of the piping of some reactors, forcing the operator EDF to shut them down. These unfortunate events highlight the need to constantly improve the safety of French nuclear plants. Several companies are developing new solutions to improve the maintenance of nuclear facilities in order to make the entire network safer.

Nuclear energy is the primary source of electricity (production and consumption) in France. This electricity comes from 56 reactors of different power levels (900 MW, 1,300 MW and 1,450 MW) spread over 18 sites throughout France. For example, a 900 MW reactor produces an average of 500,000 MWh per month, which corresponds to the consumption of 400,000 households.

With an annual production of approximately 412.9 TWh, France is the 2nd largest nuclear producer behind the United States (841.3 TWh) and ahead of China (295 TWh).

The country wants to go even further by relying more on nuclear power. The international situation has a lot to do with this. The war in Ukraine is pushing for energy independence to be less or no longer dependent on Russian gas. There is also a push to turn to low-carbon energies such as nuclear in order to respect the climate commitments made to reduce CO2 emissions by 2030.

As a result, France has announced the construction of six new EPRs by 2035. At the same time, some existing reactors should see their life span extended.

This means the question of nuclear safety is more important today than ever. The discovery of corrosion phenomena in some reactors is not good news for the industry.

Corrosion problems have recently been detected in some French reactors on the welds on the elbows of safety injection pipes. These pipes are connected to the primary circuit. They are important because they are used to cool the reactor in case of an accident. This type of corrosion called “stress corrosion” results in small cracks in the welds, which raises questions in terms of safety.

The operator EDF has been forced to shut down nearly half of the French reactors, including 12 for risk or proven cases of cracks in the pipes (the four 1,450 MW reactors, five of the 20 1,300 MW reactors, and three of the 32,900 MW reactors). Since April 2022, half of the capacity of the network has been unavailable. And the corrosion problem does not seem to be limited to the existing reactors. Similar phenomena have been observed on the Flamanville EPR, which is not yet in service.

The reasons for the current corrosion phenomena in the French reactors are not yet clear. Aging of the reactors, technical problems, human error, faulty controls, fraud? Technical investigations are underway. With 6 EPRs to be built within 15 years, the stakes are enormous.

The Importance of Good Welding Inspection in the Nuclear Industry

The construction and maintenance of nuclear reactors require regular inspection of tens of thousands of welds, which means verifying the integrity of these inspections. The slightest failure in quality control can have serious consequences and lead to safety problems, budget overruns and project delays, as is likely to be the case for Flamanville.

For Sylvain Crozet, co-founder of the digital traceability company BEWEIS:

“A nuclear facility contains hundreds of kilometers of various pipes that are welded together on site. An EPR, for example, has a total of several thousand welds. A power plant has a lifespan of about 50 years, so the welds must be absolutely reliable and operational for 50 years, to avoid having to intervene again.”

“Flamanville is not yet operational, but we already know that there were 6 welds to be repaired, which were in the middle of 6-meter thick concrete walls. The impact of the repair is enormous, a concrete sarcophagus has to be broken, with all the safety issues that this entails. Hence the need to check the welds beforehand. But in the past, there have been concerns about the verifications.”

But first, how are welds tested in industry?

One of the most reliable non-destructive tests is the X-ray test. A radiographer commissioned by the pipefitter is responsible for taking X-rays of the welds as they are made like a medical radiographer does. He identifies them using lead letters. An interpreter then analyzes the developed X-rays and declares the weld to be in compliance or not. Up until now, nothing has guaranteed the traceability of the inspections.

BEWEIS wanted to address this problem. In order to avoid possible failures in the welding verifications, BEWEIS developed the BE-tag system. This anti-counterfeit seal ensures secure traceability of weld inspections on industrial and nuclear facilities.

The history of BE-tag goes back to 2009. Sylvain Crozet, an RFID technology expert, and Jacky Catonio, a pipe fitter, joined forces to respond to a request from Areva.

At the time, the French group noticed welding defects on one of its sites. The most surprising thing was that the defects concerned welds that had supposedly already been inspected. Human error? Fraud? In any case, the two partners, joined later by a third one, developed a tool to make welding inspections more reliable and avoid any possibility of fraud.

In 2015, BEWEIS launched the BE-tag system. It consists of a small square box containing an RFID chip and hidden metal letters. The tag is to be installed at each weld using a silicone wristband specially designed to comply with nuclear industry standards (particularly in terms of material transfer).

An RFID reader and computer software are used to associate the tag, letters and welds. The process involves the pipefitter, the radiographer, the film developer and the interpreter. Everyone has their own access to the software.

“When the film is developed by the film developer, the letters appear alongside the weld. This guarantee that the weld has really been checked. The interpreter, via our software, authenticates the weld by making sure that the letters revealed on the radiography correspond to the right chip and thus to the right weld. If there are no letters or if the letters are not the right ones, the control must be run again.”

Once the interpreter has authenticated the film, he then fills in his report in the computer system and declares the weld compliant or non-compliant with no risk of error. The report is available and accessible to all stakeholders.

The Areva sites were the first to install this traceability solution, says Jacky Catonio:

“And since then, there have never been any cases of fraudulent controls at these sites. According to all our customers, with the BE-Tag system, on average, 20% more inspections are carried out. Everything is time-stamped and recorded in the system, so they know what they have to check. A solution like BE-tag could have avoided a significant number of welding problems on Flamanville.”

BE-tag is designed to work throughout the construction of a nuclear site. Once the site is finished, and the welds have been checked, the tag is removed. However, BEWEIS is in discussion with nuclear companies abroad that would like to use the BE-tag system throughout the whole lifetime of their plants.

The system is not only designed for the construction of new plants. It is also suitable for the maintenance of existing sites and the dismantling of old plants. The French company is working with the British dismantling industry on the traceability of nuclear waste controls. The company also hopes to work soon with EDF on the French network.

A Robot To Inspect Steam Generators

Another company is already working with EDF for the maintenance of nuclear facilities. ENDEL SRA is developing a miniature robot capable of maintaining a key, hard-to-reach area of a nuclear plant: the steam generator. The future robot, the size of a small toy car, equipped with a high-definition 4 mm camera, will have the mission of verifying the water passages that make up the generator’s spacer plates, explains Jean-Paul Mandier, CEO of ENDEL SRA:

“A steam generator is a vertical exchanger that has a tube bundle, [in purple on the image], which are the rounded tubes, that is about 10m high. This tube bundle is held together every meter by spacer plates [the gray cross lines with a yellow dot on the left]. These plates are drilled for the tubes to pass through. They keep the tubes at an equal distance from each other so that the whole beam is immobilized. The space around the tubes allows the water to escape and turn into steam which then turns the turbine.

The robot we are developing will enter this generator via a 180mm diameter hole, reach the 8 spacer plates, deploy the camera and check the gaps to make sure they are as they should be. It’s a robotic solution that we’re offsetting to reduce the risk of radiological exposure to operators.”

ENDEL SRA already has a robot inspector, but this existing maintenance technology does not allow the inspection/examination of all spacer plates, only 2 of them.

“Today, we inspect the first and the last plate because that’s where the holes are. Tomorrow, we will have the ability to inspect all 8 plates with this little robot, something that is not possible today because there is no access to the other plates. New steam generators are also coming. They are different from the current generators, the space between the tubes is smaller (4.7mm versus 8mm for the current generators). It is to compensate for this development that we are launching this innovation.”

Planned to be 70mm wide and 120mm long for a weight of 2kg, the robot will be equipped with a new color camera technology including small CCD and CID sensors which will allow viewing of previously inaccessible areas. There will also be additional lighting.

“The robot will have a light capable of projecting up to 1 meter in a very small space. We did not choose an infrared camera but a color camera because we need to have good visibility and accuracy. The television examination is crucial to ensure efficient and proactive maintenance and plays an important role in the nuclear safety of the plants.”

Operators will be able to control the robot with a PlayStation remote control connected to an industrial PC with video feedback. This will allow the robot to go to the areas to be inspected. Connected to power and not on battery, the robot will be able to operate without time limits. The operator will be about 50 to 60 meters away (or up to 200 meters in certain specific cases).

The robot will also be equipped with magnetized wheels to be able to roll on the wall and to reach up to 10 meters high.

“Concerning the temperature, we generally operate below 50°C. As we are in a nuclear circuit, we must respect the use of certain materials. We must not use materials that contain chlorine or fluorine. We also have to make this little robot as light as possible to be manageable.”

For now, this is a prevention inspection robot with no intended interventions.

“French nuclear reactors have a very high safety level. This level is supported by all the inspections carried out to monitor its evolution. There won’t necessarily be a defect, but it’s a question of prevention, to consolidate safety.”

To carry out this project, ENDEL SRA has obtained a grant of €850,000 from the France Recovery Plan, which is half of the overall investment required.

The company should have a prototype finalized by the end of 2022. It will first be tested at a non-nuclear facility, a test center in Chalon-sur-Saône. This is where the entire process will be qualified, from the equipment to the intervention team and procedure. This is where EDF will validate the robot and approve its use in a French nuclear power plant.