Home » COVID-19: How Can We Reduce the Risk of Transmission in an Airplane?

COVID-19: How Can We Reduce the Risk of Transmission in an Airplane? 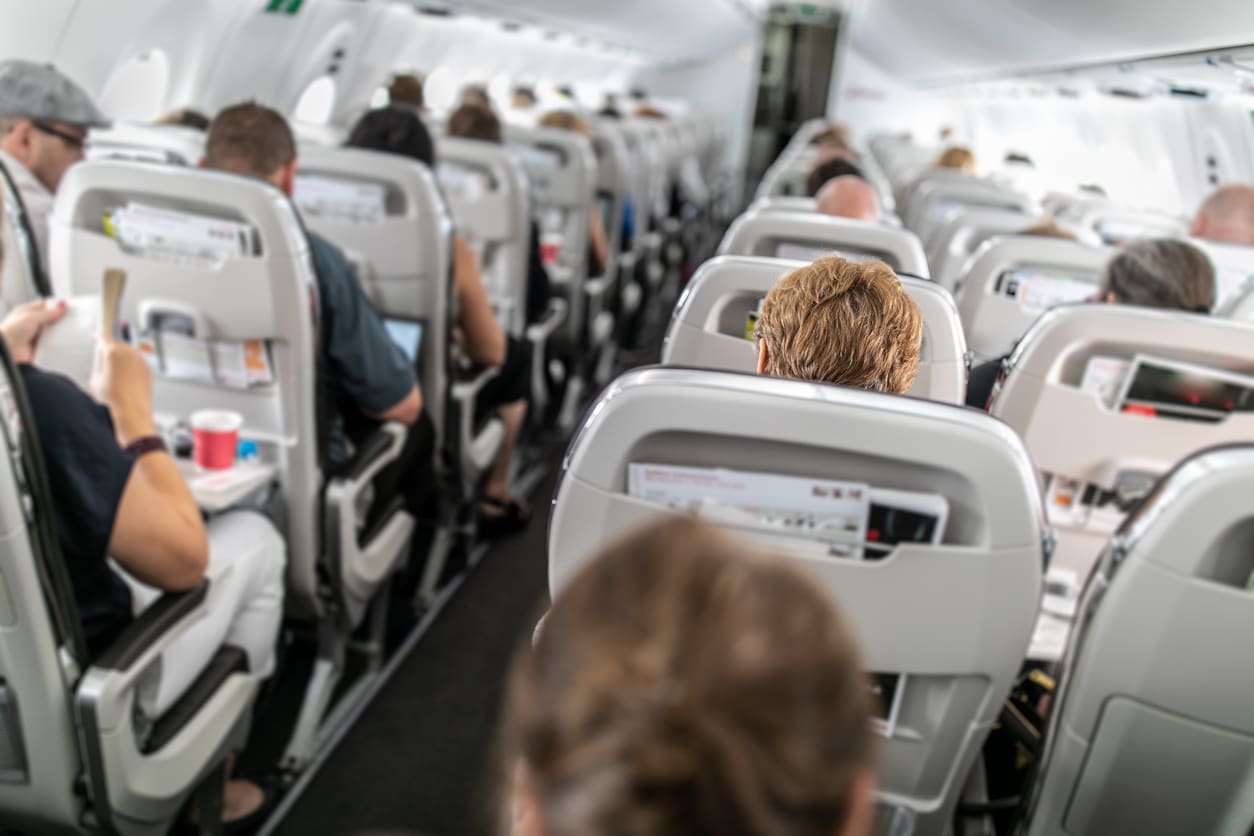 Air traffic is expected to partially resume this summer. The aeronautics sector will face several significant challenges when it comes to applying health measures to reduce the risk of transmitting the virus in an environment as enclosed as an airplane. Mandatory masks and new disinfection protocols are being studied.

The aeronautics sector is experiencing an unprecedented crisis. With aircrafts on the ground since March and production suspended, it is almost at a standstill. The economic losses are colossal and bankruptcies are showing on the horizon. Since mid-March, Air France-KLM says they “have lost 100% of their overall revenue.”

Many states have decided to inject money to prevent airlines from going bankrupt. France is going to lend Air France 7 billion euros. The Netherlands is expected to follow, with 4 billion euros in aid for KLM. In the US, the massive economic recovery plan, amounting to 2,200 billion dollars includes 50 billion dollars for airlines in difficulty.

Preparing for the Recovery

As countries progressively reopen, air travel is preparing for a gradual recovery “starting in June”. This is what Alexandre de Juniac, CEO of the International Air Transport Association (IATA), told French news agency AFP. But air traffic will not be able to resume under the same conditions as before the crisis. Airlines will have to put in place new protocols which are still being studied.

“We are in the process of building something that is both safe and allows operations to operate in an economically viable manner,” said Alexandre de Juniac. But for him, it is out of the question to condemn seats to allow physical distancing on board. However, companies could make the wearing of masks mandatory.

Software provider Ansys has just released a new simulation showing how the virus can circulate through the cabin air.  Ansys’s simulation uses complex physical models of the airflow created by the aircraft’s ventilation system to illustrate how airborne particles spread between passengers, when they wear FFP1 and FFP2 masks and when they don’t. They used their existing software, Fluent, which is a fluid mechanics software that allows to model all aspects of particle flow, turbulence, heat transfer and aerodynamics for industrial applications. Their new simulation shows that wearing a mask in an airplane significantly limits the amount of particles and the distance travelled by droplets when coughing or sneezing, thereby reducing the risk of contaminating other passengers.

For Thierry Marchal, Global Industry and Healthcare Director at Ansys, wearing a mask and choosing the right seat are the top priorities.

“If all the passengers are masked in an airplane, I don’t see any problem at the moment in getting on a plane. Being masked ensures that the largest droplets, those with a high viral load, are trapped inside the mask. However, the seats are also very important. The ventilation comes from above and this is how the air is sucked in. If you are in an aisle seat, if someone sneezes or coughs, most of the droplets will be sucked in by the ventilation system and quickly eliminated. But if you occupy the window seat, because of the edge effect of the wall, the air possibly loaded with droplets will come against the wall and go up again and create a small swirl. Now, the question is: how to to create a more effective ventilation in order to limit the recirculation of air around the walls of the aircraft?”

It will be up to the airlines to address this question.

These simulations were made for a single-aisle aircraft operating short flights. Thierry Marchal reckons that the airflow is much more complex on an ultra-high capacity aircraft.

“Our simulations do not take into account the duration of the flight. They are meant to illustrate an event, for example someone sneezing or coughing in an airplane. According to the American Society of Heating, Refrigerating and Air Conditioning Engineers, the air of an airplane is filtered 10 to 15 times per hour. All the small particles that arrive in the cabin air will spend 6 minutes in the air before passing through a filter. So for a 12 hour flight, for example from Paris to Shanghai, the air will be filtered very often. On those long flights, the biggest problems will be when people eat, get up, take their mask off. In these conditions, the risk of contamination could be higher on a Paris-Shanghai flight than on a Paris-Marseille flight.”

Ansys also looked at UV light disinfection systems and how to deploy them effectively within the aircraft. UV light disinfection systems operate according to the “line of sight” principle. In other words, for a surface to be disinfected, it must be directly visible to the light source. Therefore, any object creating shadows could reduce the exposure of the surface and prevent effective disinfection. The unit must also deliver the correct UV dosage to be effective against Covid-19, i.e.  600 μJ/cm2. For Thierry Marchal,

“All transportation companies are looking for the best way to disinfect planes, trains as quickly as possible. For our simulation, we tested two options: on the one hand fixed UV lamps and on the other hand a robot like the ones made by Xenex that passes in the middle of the aisles.”

“It is because you have to make sure that each surface of the plane receives 600 micro joules per cm2. So you have to adjust the speed of the robot to respect this quantity of UV and especially the seats near the windows. So, our engineers came up with the idea of giving the robot arms to bring the UV to these places. This system is more efficient than traditional robots and fixed lamps. It takes 100 seconds to disinfect the plane. But that robot doesn’t exist.”

Thanks to its arms, the device can cover all surfaces efficiently and in record time, although it must be placed in and removed from the cabin each time it is used.

Fixed UV lamps are already being tested in the New York subway while UVD robots are being deployed inside the Nice airport. 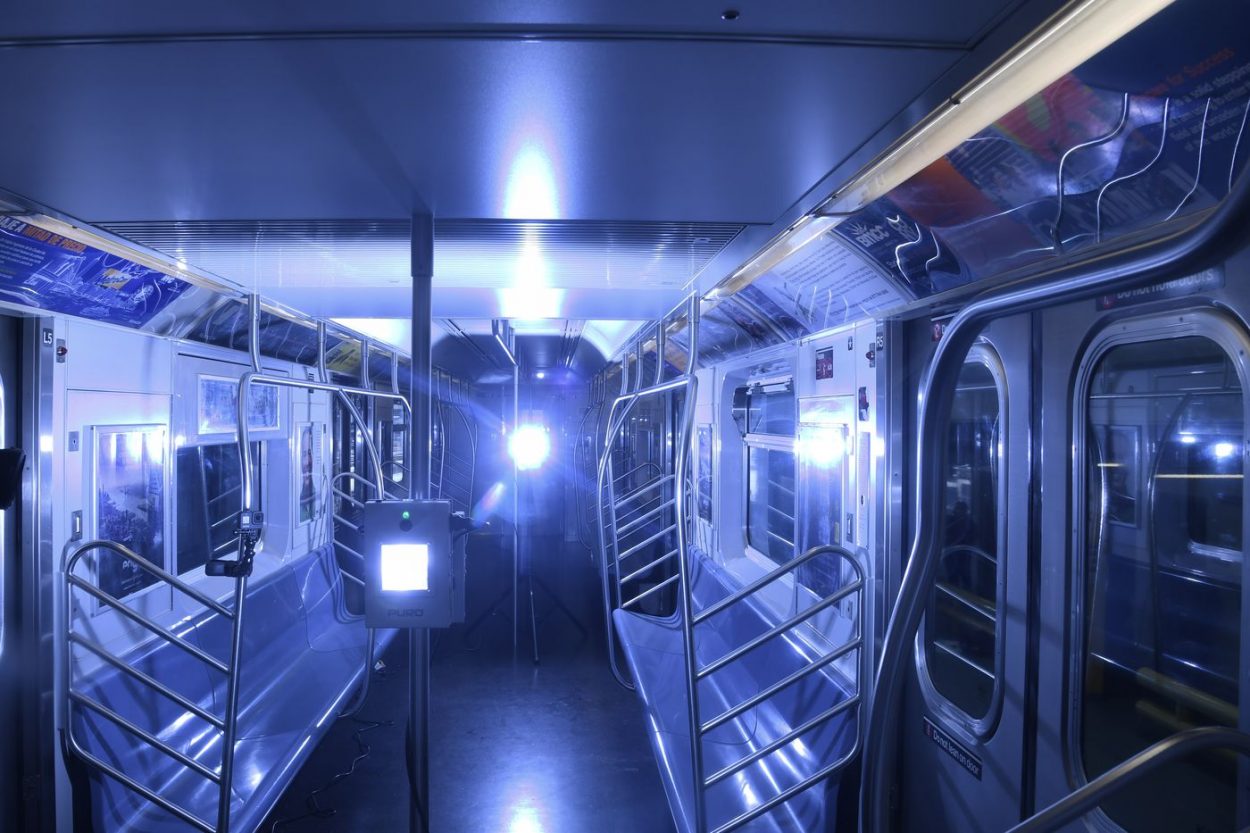