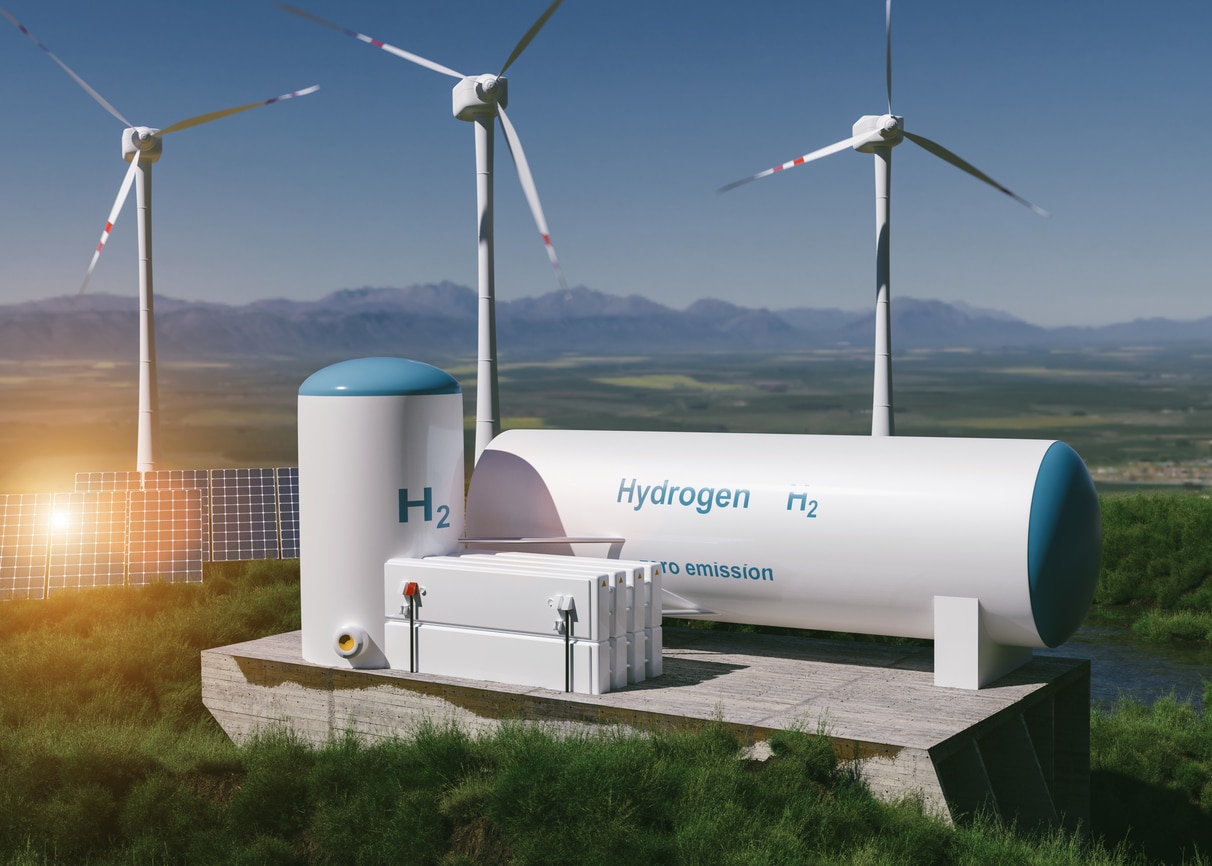 France and Germany are taking up the risky hydrogen challenge (Credit: iStock)

Europe is investing in hydrogen. In June, Germany announced a massive plan worth 9 billion euros over ten years. France is now embarking on the hydrogen economy as well with a 2 billion-euro plan for the next two years. In the meantime, the European Union is funding a 4-year project aimed at developing the world’s first-ever power-to-X-to-power industrial demonstrator equipped with an advanced hydrogen turbine.

France is ready to take up the risky hydrogen challenge. As part of the industrial plan, presented last week by French Prime Minister Jean Castex, the government is investing 2 billion euros in this gas over the next two years. A ten-year plan could amount to 7 billion euros.

As for Germany, the country plans to produce 5 gigawatts of hydrogen from renewable energies by 2030. According to the German Minister of Economy, Peter Altmeier:

“We are paving the way to become the world’s leading manufacturer of hydrogen technologies. Germany is going to play a pioneering role, just as we did 20 years ago with the promotion of renewable energies.” 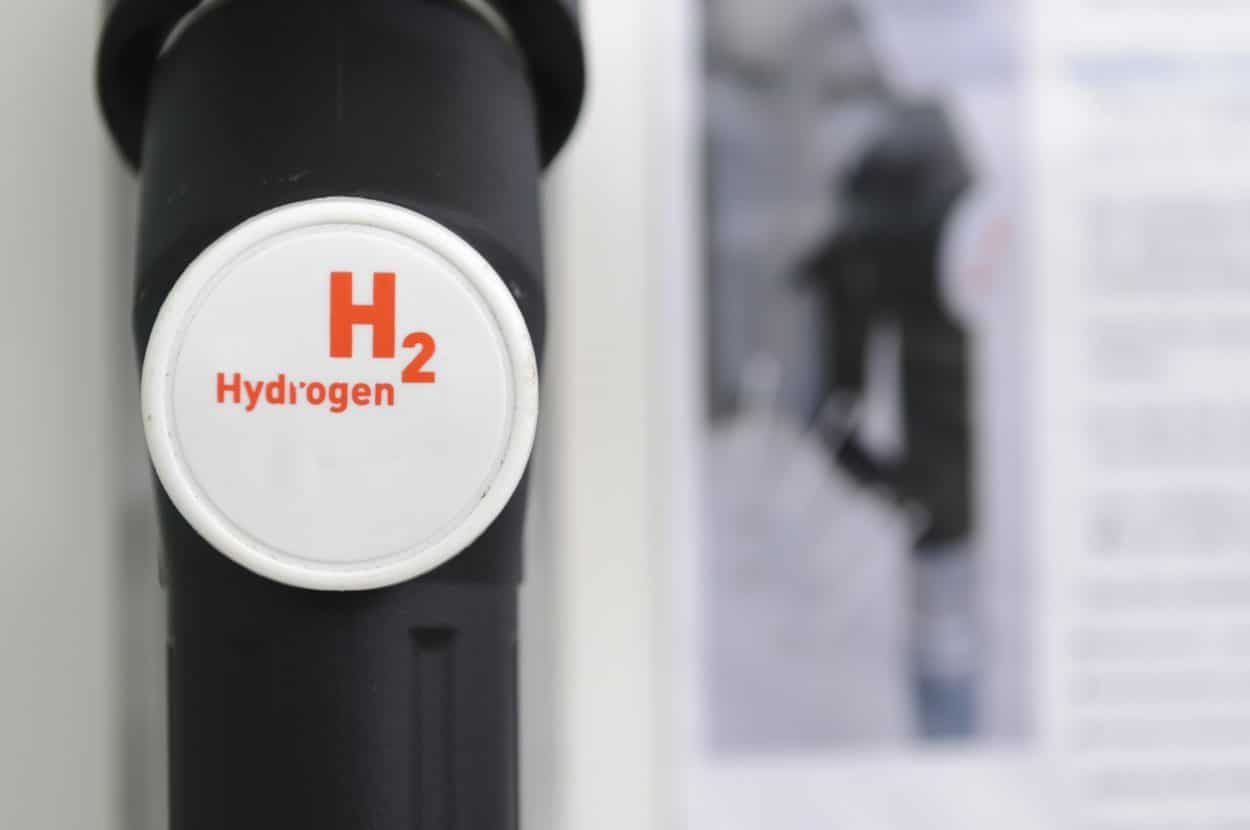 Hydrogen, the universe’s most abundant element, is said to be the perfect fuel to replace oil as it does not emit greenhouse emissions (Credit: iStock)

Hydrogen, the universe’s most abundant element, is said to be the perfect fuel to replace oil as it does not emit greenhouse emissions. However, today, the hydrogen that is mainly used in industry is produced almost entirely using fossil fuels. But hydrogen can also be generated from electricity produced by nuclear reactors. It is not considered green, but is still decarbonated as the plants do not emit carbon dioxide directly. This is the solution the French government has chosen. Hydrogen can also be obtained from sustainable electricity, for example from wind or solar farms. In this case it is considered green. And this is what Germany is mostly interested in, as part of the energy transition.

While both countries are showing their own ambition regarding hydrogen, they are also involved, via their respective domestic players, in a European project called the HYFLEXPOWER project that aims at providing the grid with green energy made of hydrogen. The idea is to demonstrate that hydrogen can be produced and stored from renewable electricity, added to the natural gas currently used in cogeneration plants and then sent to the grid.

The project is funded by the European Commission within the Horizon 2020 Framework Program. The European consortium includes ENGIE Solutions, Siemens Gas and Power, Centrax, Arttic, the German Aerospace Center (DLR) and four European universities and will build the world’s first ever power-to-X-to-power industrial demonstrator equipped with an advanced hydrogen turbine.

According to Gaël Carayon, ENGIE Solutions Project Manager for HYFLEXPOWER:

“The goal of this project is to advance research on hydrogen applications in the industrial world, as part of the energy transition and to show that it is possible to store electricity in a chemical form, in this case hydrogen, and to return this stored electricity to the network with short lead times and high power. We will use a new technology which is the combustion turbine.” 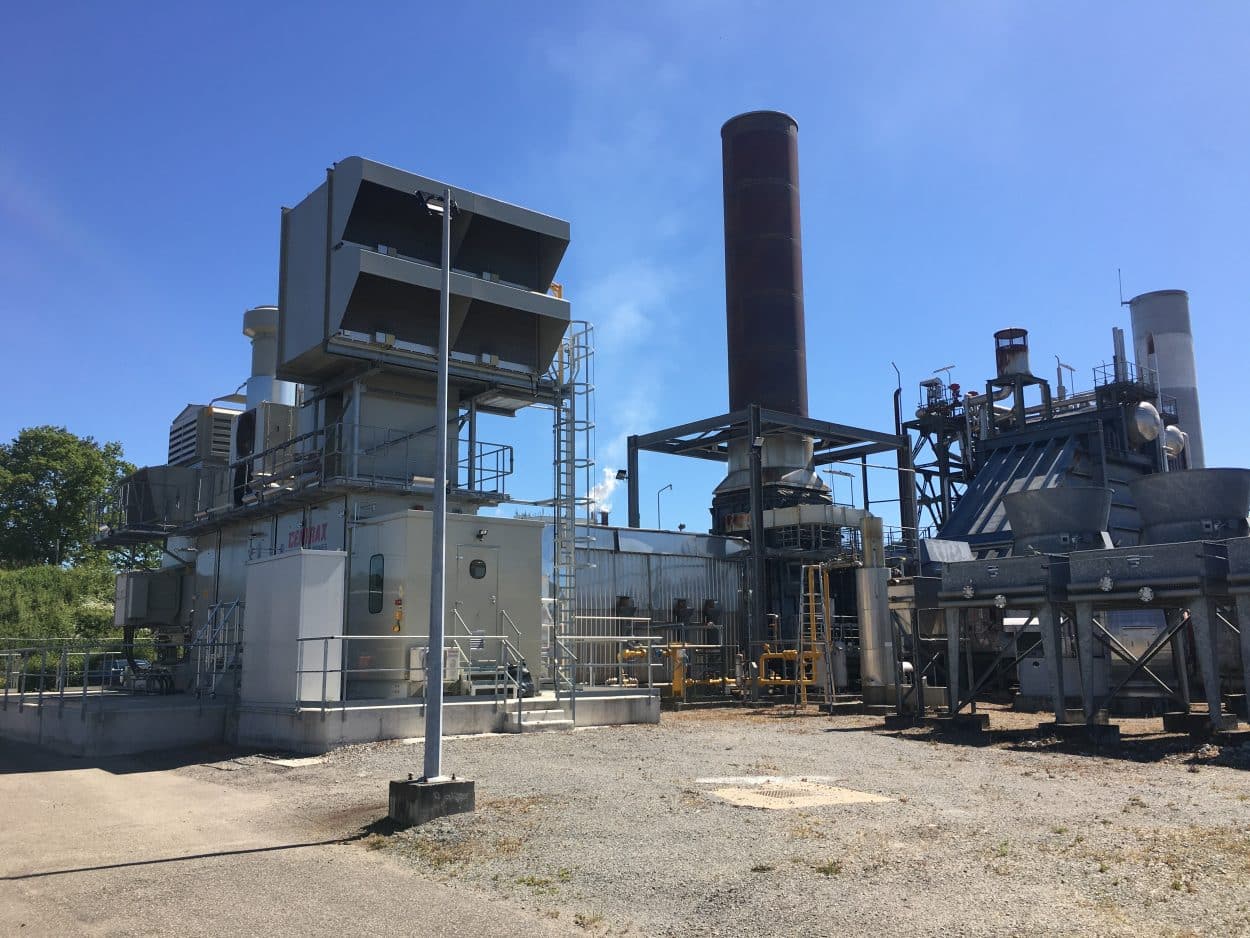 The HYFLEXPOWER project aims to demonstrate that hydrogen can be produced and stored from renewable electricity and then added up to 100% to the natural gas currently used in cogeneration plants (Credit: ENGIE)

The consortium will use the electricity that is produced in excess by renewable energies (wind and solar), transform it into hydrogen thanks to the phenomenon of electrolysis, compress this hydrogen, and store it in gaseous form in container storage cylinders that are compressed between 200 and 300 bars explained Mr. Carayon.

“This hydrogen stored at high pressure will then be expanded and mixed with natural gas. We will start with a mix of 30% hydrogen and 70% natural gas and we will go up to 100% hydrogen to be burned in the gas turbine. The ambition is that this combustion will be completely decarbonated.”

A fairly conventional gas cogeneration site in the city of Saillat-sur-Vienne in France has been chosen to host the demonstrator.

Siemens Energy will supply the electrolyzer for hydrogen production and develop the hydrogen gas turbine. They will use an existing Siemens SGT-400 industrial gas turbine that will then be upgraded to convert stored hydrogen into electricity and thermal energy. Centrax will upgrade the hydrogen fuel system and install the new turbine.

ENGIE Solutions will build the installation of the hydrogen production and storage line up to the natural gas/hydrogen mixture before injection into the turbine.

The German Aerospace Center (DLR) will contribute to the development of hydrogen turbine technology.

“This will be a world-first since this machine does not exist yet. It will be developed over the duration of the project. Conventional turbines today accept up to 10% hydrogen. Beyond that, the physicochemical reactions in the combustion chamber are different. We hope to prove that a turbine running 100% on hydrogen is viable and we want to demonstrate to turbine manufacturers that it is possible to migrate from a gas turbine to a hydrogen turbine by adapting an existing turbine.” 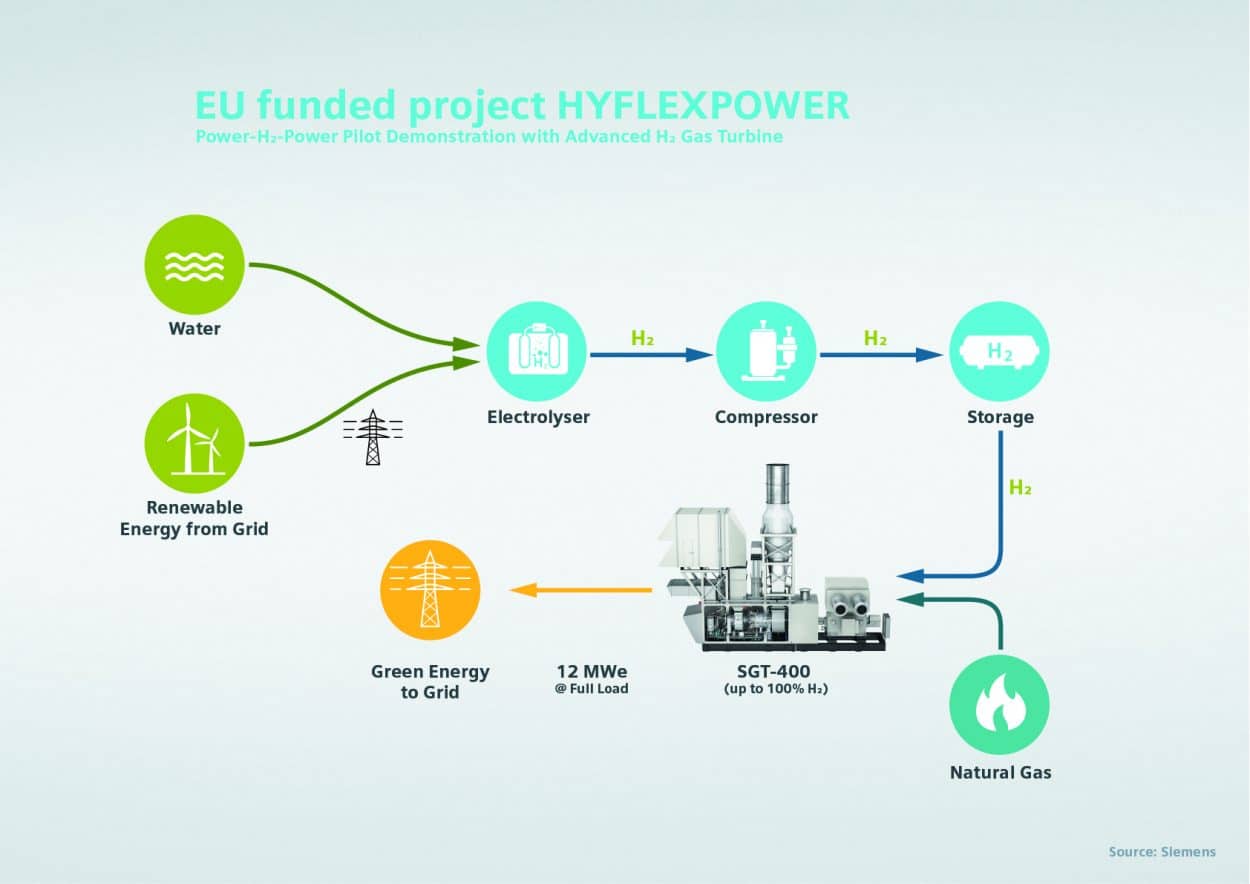 The consortium will use the electricity that is produced in excess by renewable energies (wind and solar), transform it into hydrogen thanks to the phenomenon of electrolysis, compress this hydrogen, and store it in gaseous form in container storage cylinders that are compressed between 200 and 300 bars.

A New Outlet for Wind and Solar?

The concept intends at the same time to provide a new outlet for electricity in surplus that we do not know how to store well. The electricity that comes from renewable energies is generally intermittent.

“When there is a lot of wind in Europe, we end up with a lot of electricity that we don’t know how to store and we often find ourselves paying producers to stop production because there are not enough consumers on the network. This often happens in Germany, for example.”

Mr. Carayon reckons that the question of transport is not the main subject of the project which mostly focuses on the storage and restitution of the electricity on the network.

“But being able to produce electricity locally and store it locally is better than having to transport it over long distances as we do today with nuclear power plants. The idea will be to develop a network that is territorially extremely meshed. Having producers closer to consumers can only be beneficial.”

The consortium expects to have the turbine ready in April 2022 and start the first tests in 2022-2023. One important element remains unknown at the moment: the price of this electricity.