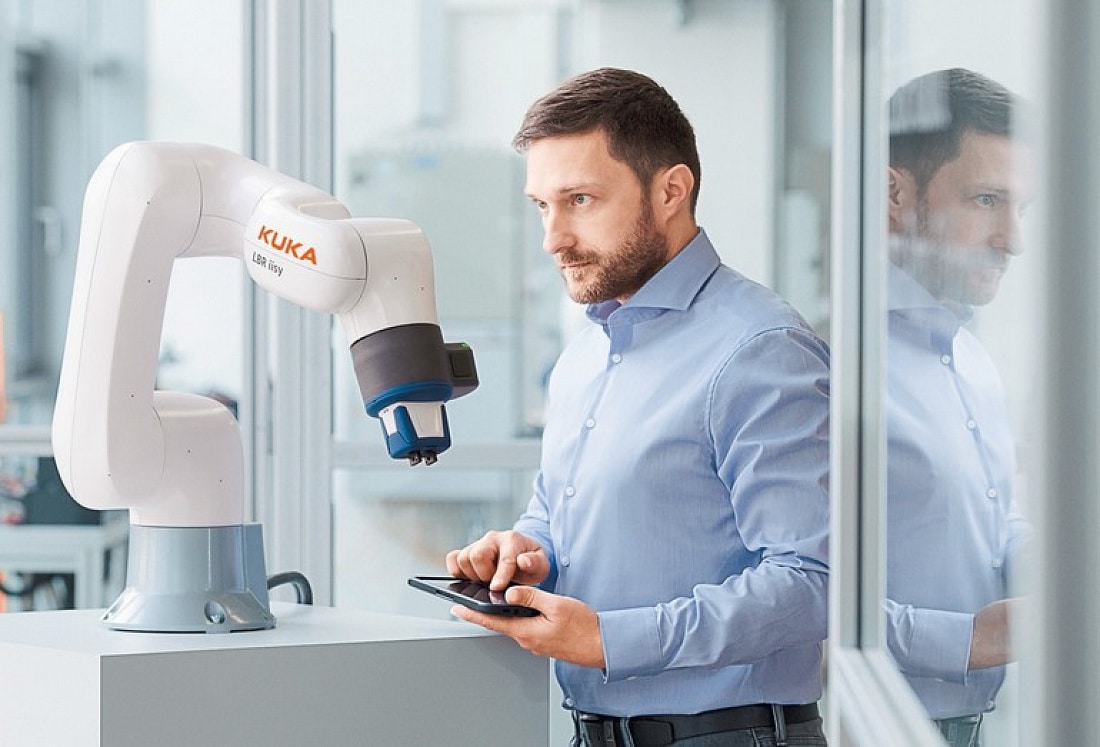 The KUKA family welcomes a new member at automatica. The LBR iisy is a sensitive lightweight collaborative robot that was unveiled earlier this year at Hannover Messe and will be market-launched in 2019. We interviewed Christian Tarragona, Senior VP of R&D at KUKA.

DirectIndustry e-magazine: Could you introduce us to the LBR iisy?

Christian Tarragona: It is the little brother of our LBR iiwa. LBR iisy is a small robot of 18 kg weight, with 6 axis, a 3 kg payload and a maximum reach of 600 mm. The LBR iisy is a cobot with integrated torque sensors on each axis. This makes him sensitive, e.g. he can feel and is therefore capable for human robot collaboration. He can be operated by simple guiding him by hand and/or using a consumer tablet with our new graphical easy to use interface. It is specifically designed – but not only – for the electronic market and to work alongside or together with humans.

DirectIndustry e-magazine: Do you see a growing demand for cobots?

Christian Tarragona: Yes there is a demand in factories all over the world for cobots for picking and placing tasks, for very simple and low added value tasks such as display testing, logistics and packaging. The idea is that the cobot is not meant to replace the worker but to work with him, to do the boring things while the worker focuses on more complex and skilled tasks. Cobots can also be used to improve the ergonomics of currently bad workplaces, eg. the cobot is doing the repetitive and ergonomic bad tasks while the human is guiding the cobot or is preparing the next task. Here at automatica, we show how the LBR iisy can easily take parts out of a box and work with a human without a safety fence. The robot cannot harm the worker, you just need to touch it and it stops moving.

DirectIndustry e-magazine: Why is there a demand for lightweight systems?

Christian Tarragona: By reducing the weight of the robot, you can also reduce the cost of the whole system. Besides that, lightweight is very important for human-robot collaboration. A heavy robot can do a lot more harm than a lightweight one. For example, collision detection works better with a lightweight robot because the robot can be faster stopped or be faster moved in way to reduce the impact of the collision.

DirectIndustry e-magazine: What do you think about smart cobots that involve artificial intelligence?

Christian Tarragona: This is the next stage of cobotics. Today, you have to program the robot to do assembly tasks. In the future, with AI, you will just have to show a base functionality and the robot will be able to reproduce the task and then improve from task to task. We also show at automatica 3D camera vision that enables the robot to see its environment. The LBR iisy can already « feel » and with our 3D vision technology is also able to « see », so « feeling » and « seeing » are the basis for understanding your environment. Adding AI, the robot will be able to handle tasks that are new for the robot and it can handle them in unstructured and unknown environments. Another very interesting apect of AI is NLP – natural language processing. Our vision is not just to command the robot by speech, but to have dialogue between human and cobot, hence improving the collaboration and make it similar to a collaboration between humans.

DirectIndustry e-magazine: When will KUKA have an AI prototype ready?

Christian Tarragona: We are already working on this so I think at the end of 2019, we will have interesting things to show! We are also working on a language functionality so that the cobot and the human can have a dialogue.