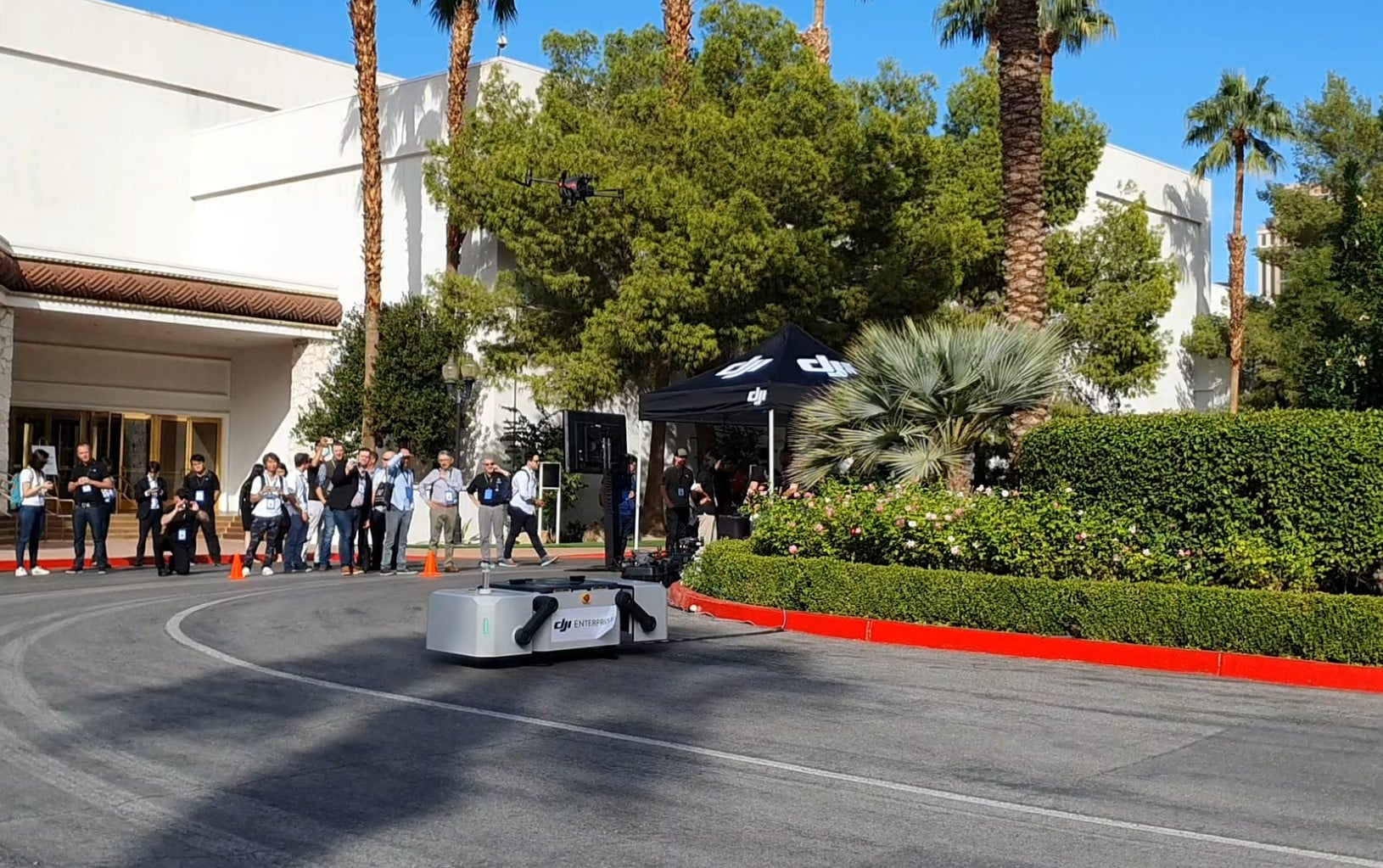 DJI AirWorks is one of the largest drone manufacturer’s enterprise user conferences and is held this week in Las Vegas. Chinese drone company DJI opened the conference with a demo of their new dock solution that facilitates the launch of drones in remote locations. This new system, which will be commercially available next year, could have tremendous applications in the oil & gas sector. We were invited to attend the event.

The 100 kg-Dock prepares the drone for launch and landing and makes sure flight conditions are safe. It also captures all the data and photos the drone will take during its operations. It also charges the batteries. You just have to fly the drone once, show it the mission, and then it will be able to repeat the same operation over and again.

The Dock is equipped with a security camera that gives visual reference, a light, and a weather station that sends temperature information and wind speeds. In case of heavy winds, over 12 meters per second, the Dock will not open and the drone won’t be able to take off. In case the drone is already on a mission and the wind suddenly becomes violent, the drone will automatically land at a backup landing spot.

The Dock also has an RTK for a precise position, landing, and data capture. On the back side of the dock, an air conditioning system is there for heating and cooling. It also enables the batteries to charge more quickly. 25 minutes are needed for the drone to be charged at 80%.

A remote controller can also be connected to the drone. It allows the operator to take over during a flight, for example for safety purposes.

DJI has carried several proofs of concept with industrial companies and plans to add other features to the Dock next year such as manual flight control.

“There is also a third party cloud API which allows developers to add more features to the standard DJI software offering.”

And they are also looking at the possibility to have a payload on the drone which is on the Dock.

The Dock system removes the need to have a human operator holding a drone controller at the site. And as regulators increasingly approve autonomous flights beyond visual line of sight, the oil & gas sector could be interested in deploying such a system to ease repeated inspection operations in remote locations.

The idea would be to install the station on top of a facility for better communication transmission. Then, the operator can just be in a totally different location and follow in real time the launch, flight, and landing of the drone.

Energy company OXY (Occidental Petroleum) has tested the Dock in one of its training centers to inspect a tank battery. Dylan Allen, UAS Supervisor at Oxy sees great potential for the industry :

“We pre-programmed 8 waypoint inspections and we had the drone take pictures of the signs on the tanks. You can program as many waypoints as you want. And you can always repeat that same route over and over again. And when you think about corrosion for example, there are so many applications for the Dock for inspecting oil fields.”

The Dock, however, cannot be placed in any random location, explained Grant Hostika:

” It’s important to survey the site that you put the Dock on. You need a good take off location, for example on a rooftop. You need to think about the angle of obstruction close to the Dock. It must be in an open area, with no buildings in front of it because if not, it can be difficult to connect to satellites.”

If the Dock is intended to be stationed in a permanent way, it can be put on a concrete pad for better stability.

In addition to the oil sector, the Dock could prove useful for rail inspections over hundreds of kilometers. However, it needs to be connected to an electric outlet, which makes it impossible to use in the middle of nowhere. But according to Adam Lisberg, DJI Corporate Communication Director,

“We are working on this. Solar panels could be a solution and then using Starlink satellites for Internet connection.”

The Dock will be commercially available in the second quarter of 2023. Its price will be around 35,000 USD. However, due to the increase in the price of some components, this price could change at the time of launch next year.

Watch our video at Airworks