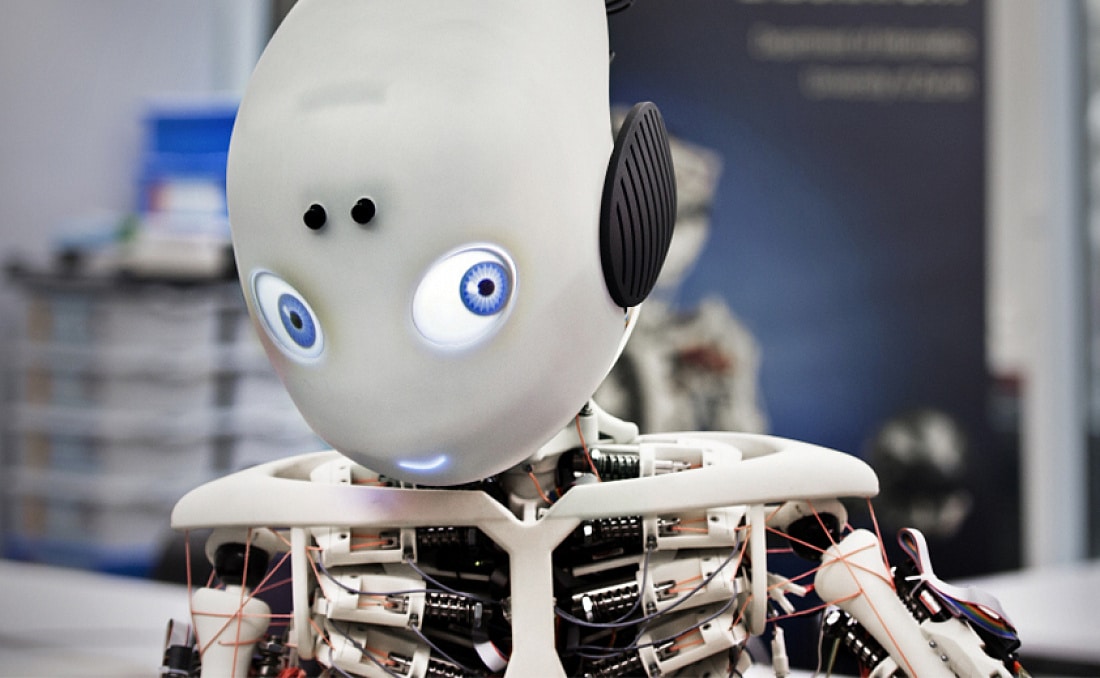 Roboy is a humanoid robot developed by the Universities of Munich and Zurich and 3D printed by EOS. Equipped with an advanced cable system that mimics muscles, it can exhibit human-like behaviors. DirectIndustry e-magazine shook hands with Roboy at Hannover Messe (watch our video) and met with Rafael Hostettler, Project Manager and André Surel Director EOS France to learn more about the robot’s technical characteristics and possible uses.

DirectIndustry e-magazine: Why did you choose to build a humanoid robot?

Rafael Hostettler: We already have automated systems that can do complex tasks, but no robot can handle objects like a human being. The Roboy project goal was to build a robot with human complexity and intelligence, and able to interact with the world with the same level of complexity as humans. We tried to imitate biological systems to create a robot that resembles a real human body.

DI e-magazine: What did you have to do to imitate the body?

Rafael Hostettler: We improved the mechanics. We built muscle units using a standard electric motor with an attached spring and a cable running through them like a tendon. So we have a force transmission line running from one point to another, sort of like a muscle. And we can simulate the elastic behavior of a muscle. But for the moment, we don’t have effects like muscle bulging. In terms of sensing, we measure things like the human body does. We measure tendon lengths and tension forces. That gives us a good idea of the state of the robot and helps us control it so that it exhibits interesting behavior.

DI e-magazine: Why did you give Roboy a human face?

Rafael Hostettler: There is clear evidence that adding human features to a robot increases people’s trust in it. And we build humanized robots because they seem more familiar to us.

DI e-magazine: Our video shows that Roboy can shake hands. How is that possible?

Rafael Hostettler: Shaking hands is really hard for a classic industrial robot. The robot must interact with the human in a way that balances the force of the handshake with what the human expects. You need to measure forces extremely fast. You have problems with high inertia. That makes it sort of dangerous. With Roboy, we don’t have that. The muscles are responsive. The force transmission spring is part of a mechanical system capable of handshake behavior. And we can modulate the stiffness of the joint by pretensioning muscles against each other.

Rafael Hostettler: These tendons and muscles make for a very lightweight robot that is safe to work with. It could be used wherever you want a robot to interact with humans performing industrial tasks. For example, when installing car doors, the robot could provide the lifting force and the human would just have to put it in place. Another example is a mobile phone assembly line. Roboy could pick up parts and place them so as to make the job very easy for the assembly worker.

DI e-magazine: Roboy was almost entirely 3D printed. Why was 3D printing important to the project?

André Surel: It’s a cost-effective solution that enables us to make very functional parts. We can design things in ways that were not possible before. Roboy’s hand and upper arm are one piece, with sensors and common cables for tendons. Before, we would build a hand out of many little parts, requiring many hours of assembly. With 3D printing, you integrate more functionalities in the part, making it more efficient. We can prototype fast and then produce fast. It took two or three days to print Roboy.

DI e-magazine: What print materials did you use?

André Surel: Roboy was printed out of PA 200, a polyamide. It’s strong enough, resistant to temperature and readily available. Using laser sintering gives us the most freedom. Every part of the robot with a specific geometry has been 3D printed, including bones and muscle units. So far, the only thing that was not 3D printed was the skull, the white shell with the face.

DI e-magazine: Are you working on a soft coating that would imitate human skin?

André Surel: We can, in fact, print elastic materials, and are working on a more elastic polymer called PEBA that could serve as skin.