A Head Start on Augmented Reality 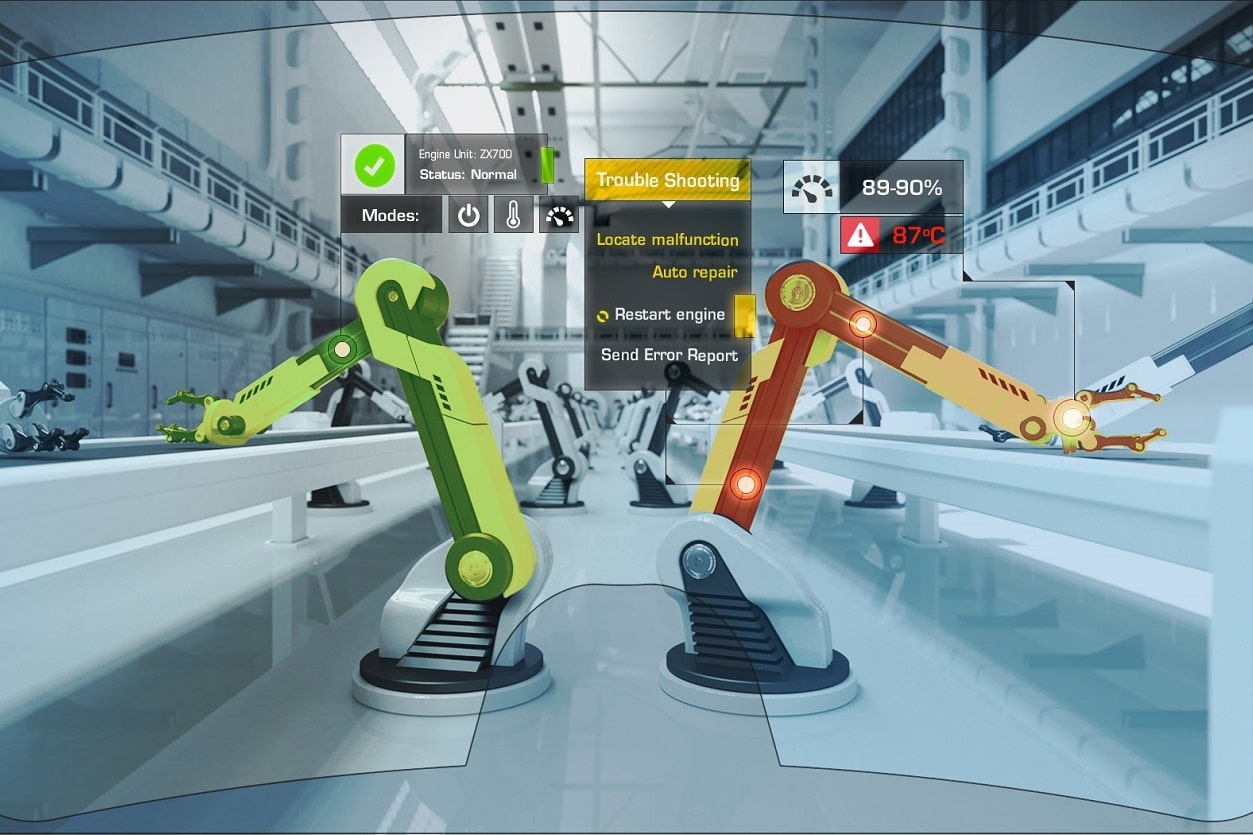 Heads-up displays with digital overlays can be used in hands-on training and remote assistance that promises true interactive mixed realities.

When it comes to immersive technology, virtual reality (VR) takes a back seat to augmented reality (AR). The main difference between VR and AR is that in VR, the person wearing a headset that blocks out the world is suddenly transported to a new, artificial environment. In AR, computer-created objects are placed into the existing, real-world environment. AR is arguably safer than VR in workplaces, where being completely immersed in a headset while around heavy machinery could be extremely dangerous. However, AR is in its early stages, with relatively simple headsets designed primarily for hands-free working destined to be upgraded in the long-term to complex head-tracking devices that can truly augment reality. But AR in industry is expected to explode over the next five years, with smart glasses said to reach 27 million shipments.

AR headsets have transparent displays, effectively creating what looks like a projector screen or hologram overlaid onto reality. The Microsoft HoloLens has been used during a Skype video call between a remote plumber and a customer with a leak. The plumber can see on a Microsoft Surface tablet what the customer is seeing on a HoloLens headset, so the plumber can draw a circle on their tablet around the U-bend that needs tightening up, then they’ll circle the spanner or wrench that the customer needs to use. The industrial applications of such technology could range from remote working to skills transfer, training and a lot less travel for engineers—but there are limitations.

Consumer-oriented AR headsets—including Google Glass, Microsoft HoloLens, Meta2 and Magic Leap—have a limited field of view in which virtual elements can be shown. Warren Lester is product manager at motion capture company Vicon, which develops the software that drives augmented-reality projects for the engineering and life sciences industries.

When trying to use these products for industrial applications, they are not always very effective, and where accuracy of the overlaid data is important—like providing critical information such as ‘insert rivet here’—tracking of the operator’s head, and potentially a tool, in an accurate fashion is key.

Several headsets are being designed for augmented automation for industry, including the Canon MREAL HM-A1, DAQRI Smart Helmet, ODG R7, Vuzix M100 and Epson Moverio Pro BT-2000. Although some have unique characteristics (for example, the DAQRI Smart Helmet has sensors to measure ambient temperature), what mostly sets them apart is the design, display quality, field of view, processing power, battery life, input options and price. What they have in common are a stereo view and the Android operating system.

The Vuzix M100 headset is used by SAP as a productivity tool in warehouses, allowing the wearer to scan barcodes and work hands-free, and also as part of a remote support system. It’s different from most headsets, its monocular design overlaying data only for one eye via a tiny display, though its 5-megapixel HD camera is standard.

Rudimentary AR is about putting useful information into the wearer’s field of vision and presents a huge opportunity for hands-free working. Volkswagen has been using AR to train its engineers. Each trainee wears an AR headset and sees the relevant training manual in their field of vision as they work on a physical problem. The classroom is effectively virtualized, and practical work extended in scope. Robert McFarlane is head of labs at digital agency Head:

The jobs that most benefit from advanced AR are those where you need to do things with your hands and need quick access to data, information and instruction. Say you’re learning how to fix an engine, but you don’t know how the individual components slot together—AR would offer a visual overlay giving info about each component available as well as arrows pointing to where they are in the engine.

During a test, Boeing found that its factory trainees assembling an airplane wing were 30% faster and 90% more accurate using AR-animated instructions on tablets than on paper manuals.

Putting a hands-free instruction or training manual into the field of vision of an on-site engineer could be huge, but there is more, explains Lester.

AR is a set of technologies that visually fuse physical elements with virtual, or computer simulated elements.

Ideally, it should have overlaid video containing virtual elements that can be interacted with by the wearer.