INSIGHTS| China’s Road to 2025 (4/8) – RAILWAY – With its “Made in China 2025” strategy unveiled in mid-2015, China has set itself the goal of becoming the world’s leading economic power. In this context, DirectIndustry magazine is partnering with intelligence consultancy DCA to offer our readers key information about this industrial strategy. Every two weeks, Jean-François Dufour, CEO of DCA, will decipher one of the objectives of the “Made in China 2025” plan including semiconductors, machine tools, electric vehicles, railways, and telecom.

The railway industry is emblematic of China’s global ambitions. While gigantism and the support of a huge domestic market are two keys to China’s power, the race to innovate is an essential component of its strategy.

The railway sector is where Chinese industry has made the most spectacular progress.

In 1988, China was producing the last Datong steam locomotives, using technology inherited from the 19th century. In 2008, they delivered the first “Chinese” high-speed trains with the CRH2C. While these first models were directly derived from technology transfers by foreign partners, the participation of local innovation in the CR400 Fuxing train sets delivered since 2016 is no longer disputed.

A Global Network in Full Development

Behind this impressive development is the world’s largest rail market, and it is constantly growing. Between 2009 and 2019, China’s network grew from 80,000 to 139,000 kilometers of railway tracks.

In terms of the illustrious high-speed section, China’s construction of over 35,000 kilometers counts for two-thirds of the network worldwide. China also has the longest electrified network in the world (over 100,000 kilometers of track), while nearly 40 cities in the country have subway systems.

But rail is also one of the priority areas Chinese industry’s global offensive. From the main lines built and equipped with rolling stock in Nigeria and Angola to the replacement of old subway trains in Boston and Chicago, Chinese railways have become a significant global player.

This goal was the main reason behind the creation of the giant CRRC. Created in 2015 from the merger of the two groups CNR and CSR, CRRC (China Railway Rolling Stock Corp.) has become the world’s leading manufacturer of rolling stock, with the capacity to manufacture over 500 high-speed train sets, 12,000 subway cars and 50,000 freight cars per year.

A Race for Innovation

But economies of scale are not the only factor the Chinese railway industry relies on. All of CRRC’s major subsidiaries – which, while coordinated internationally, remain in competition with each other on the domestic market – are involved in a race for innovation.

This race for innovation is manifold:

>> First of all, it is illustrated by the adaptation of existing architectures. For example, CRRC Changchun Railway Vehicles recently presented a variable gauge derivative of the CR400, which is aimed at the China-Russia market.

CRRC Changchun Railway Vehicles recently presented a variable gauge derivative of the CR400, which is aimed at the China-Russia market (Credit: CRRC).

>> It also aims to develop the “biggest one”: This summer, CRRC Zhuzhou Electric Locomotive unveiled the most powerful electric locomotive in the world, a 106-meter long, 24-axle, 28,800-kilowatt “monster” designed for coal convoys. 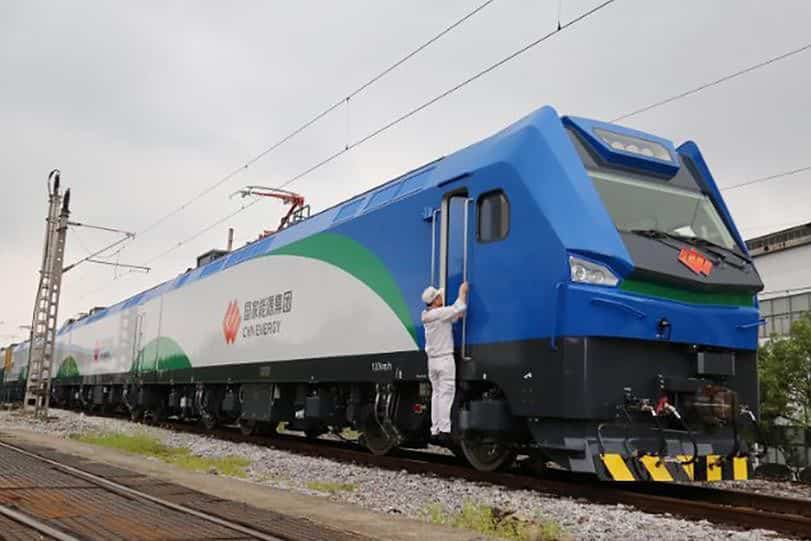 >> It may also, depending on the needs of the market, seek to produce the “lightest one”: The latest generation of subway cars developed by CRRC Qingdao Sifang integrates structural elements in carbon fiber for a model 15% lighter than the previous one.

The latest generation of subway cars developed by CRRC Qingdao Sifang integrates structural elements in carbon fiber for a model 15% lighter than the previous one (Credit: CRRC)

Other developments are more radical, such as the automation of trains. China, like many other countries, has automated, driverless subway lines. But CRSC (China Railway Signal and Communication Corp.), CRRC’s counterpart for this sector, has other ambitions.

After testing autonomous intercity trains in 2016, some CRRC high-speed trains are now managed by an automatic system, with a driver as a back-up solution only in case there is a problem. The system has been tested since 2018, and will be used on the Beijing – Shijiazhuang high-speed line for the 2022 Winter Olympic Games for all the world to see. 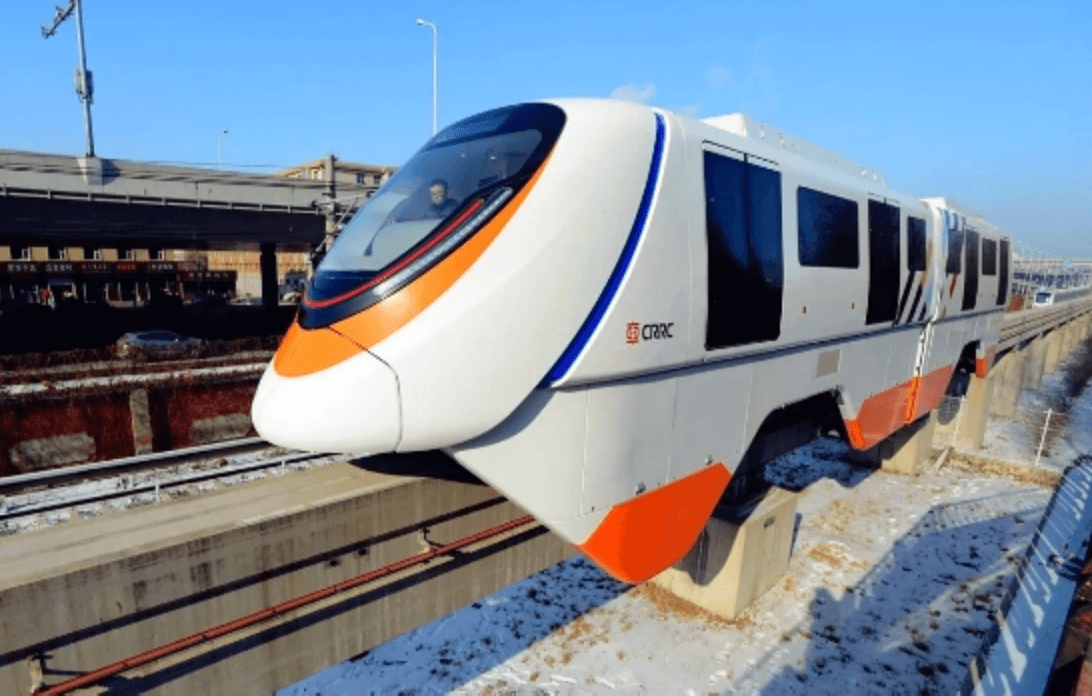 The Chinese railway industry is also looking at Maglev (magnetic levitation) systems, which have become one of its priority areas of development. Today China has three of the six magnetic levitation business lines operating in the world (in Shanghai, Beijing and Changsha). These are urban, moderate-speed (100 km/h) lines developed with national technologies. CRRC Zhuzhou is finalizing a second-generation aiming for 200 km/h specialized in intercity connections.

CRRC Qingdao Sifang is already developing a third-generation aiming for 600 km/h. Although no timeline has been set for the moment, various infrastructure and vehicle components have already been tested and testify to how far the project has progressed.

Urban rail transport is also contributing to Chinese innovations. Faced with the cost of subway construction sites, tramways have made a big comeback in China as well as in other parts of the world. Innovations in motorization are of particular interest, notably with the use of hydrogen and supercapacitors.

On a more radical note, the country has also developed monorail technology – representing the first real domestic competition for CRRC. Alongside the giant conglomerate’s own projects, the most advanced is the “SkyRail” developed by the car manufacturer Geely.

So far the concept has not been as successful as was expected at the time of its launch in 2017, but it has nonetheless won a few contracts abroad. 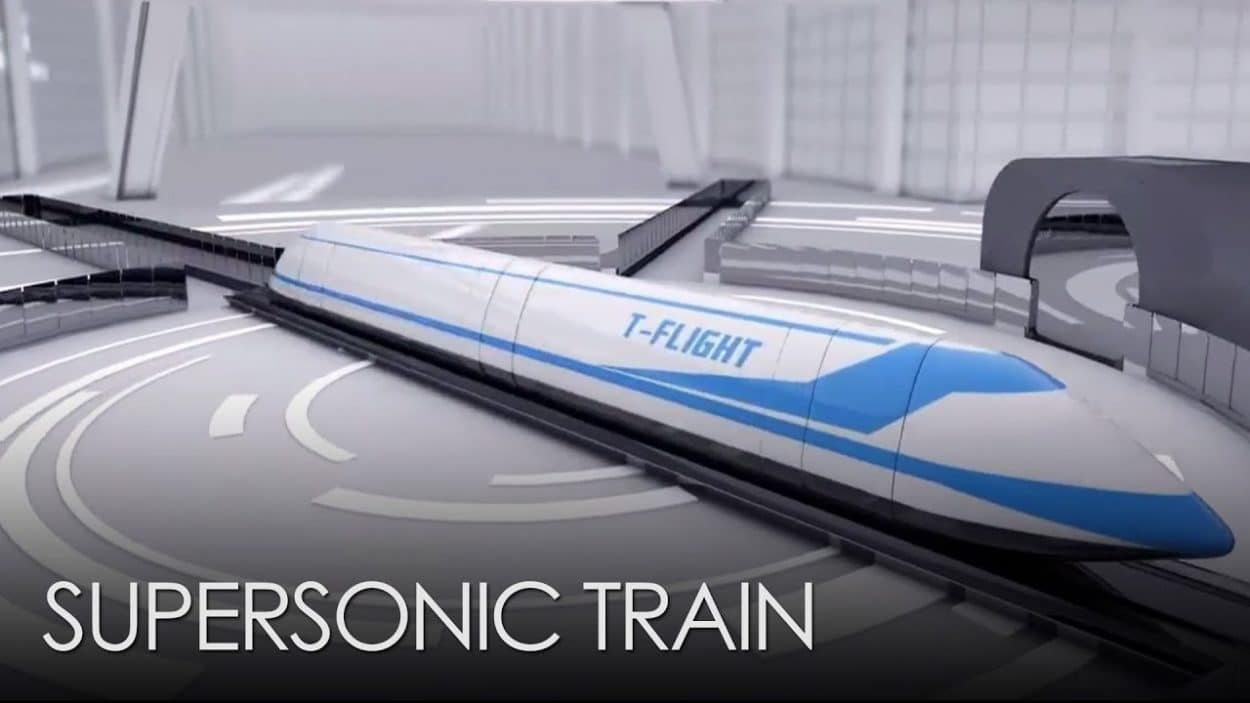 Lastly, China is also working on the railway of the future. The country has launched its own Hyperloop project, combining magnetic levitation and vacuum tube technologies.

CRRC is not the one leading the ambition for this technological breakthrough, with a target of 4,000 km/h, instead, it’s the other central conglomerate CASIC (China Aerospace Science and Industry Corp.), operating in aerospace. But CASIC has enlisted the help of traditional rail specialists such as CRCC (China Railway Construction Corp.), one of the country’s leading line builders.

China was one of the last bastions of steam, the original technology of the railway industry, but it intends to lead the race for the technologies of the future.