Home » The Hy-ShAir Concept: Re-Thinking the Future of Long-Haul Aviation

The Hy-ShAir Concept: Re-Thinking the Future of Long-Haul Aviation 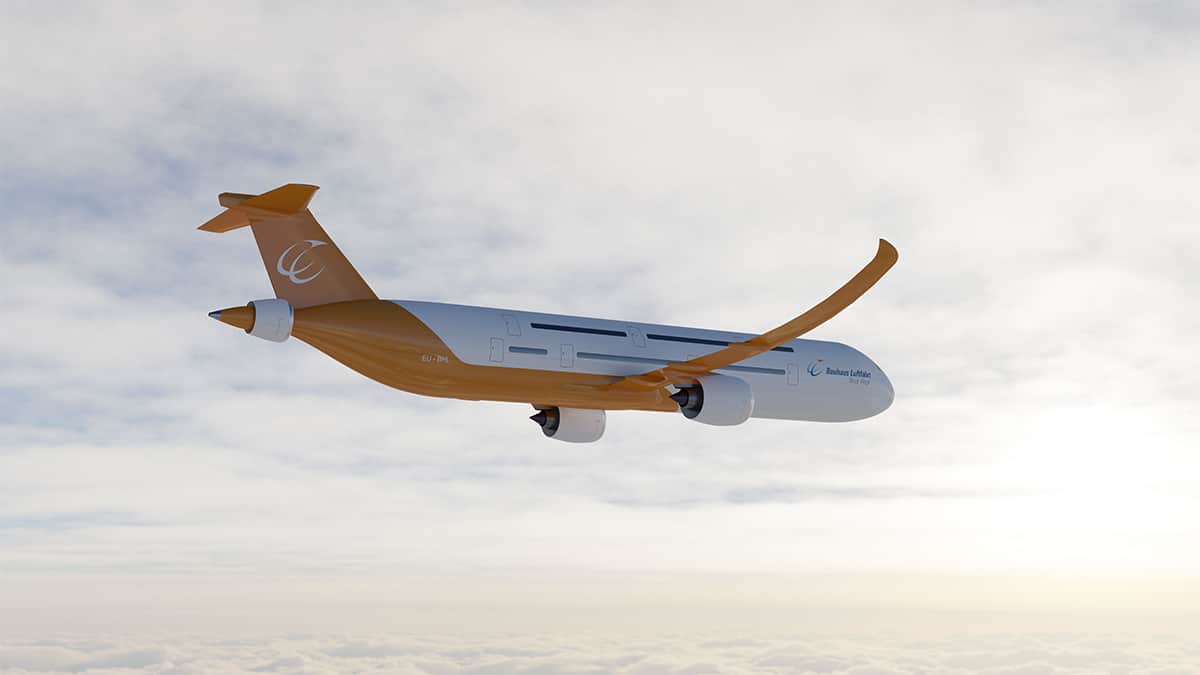 How can we make aviation ready for the future? The interdisciplinary team at Bauhaus Luftfahrt carries out internal group design projects on this issue at regular intervals. Focusing on aviation’s contribution to reducing overall emissions, the 2019 group design project Hy-ShAir dealt with the long-haul air transport market, incorporating both operational and technical innovations. A holistic approach is required to re-think the future aviation sector to reduce the ecological footprint, use aircraft in a better way, and make a long-distance trip more enjoyable for passengers.

This is raising the following research goals in the project:

The contribution of aviation to reduce greenhouse gas emissions is currently the subject of intense discussions. In addition to technical innovations, an improved use of existing transport capacities and increased operational efficiency offer the possibility of reducing emissions at fleet level.

While only one-tenth of passengers travel on routes exceeding 3500 km, this segment accounts for 35 % to 40 % of the total aviation fuel consumption. The share of connecting flights in this segment is over 60 %, resulting in longer travel times for passengers and longer distances flown compared to direct flights.

As part of the group design project, an interdisciplinary team of scientists at Bauhaus Luftfahrt worked on the concept of an open “Seat Exchange Platform” – “ShAirline”. This involves dissolving the classic airline-aircraft ownership relationship, with individual seats being leased by vendors from various industries and then offered to passengers. By bundling demand between two airports through transport providers, surplus capacity is avoided and more direct connections are made possible.

This reduces deviations from the optimal route and thus shortens the distance covered compared to transfer connections. Omitted stopovers can be translated into lower travel speeds without affecting the passengers’ travel time. The resulting changes to the network and business models can contribute significantly to reducing emissions and are part of future research at Bauhaus Luftfahrt.

02. Hydrogen as an Alternative Aviation Fuel: Generation and Storage

Hydrogen production via water electrolysis has evolved into one of the most cost-effective methods to generate renewable energy carriers. In aviation, an analysis of suitable storage options shows that cryogenic tank systems for liquid hydrogen (LH2) are most promising for long-haul aircraft, such as those considered in the Hy-ShAir project.

In a future deep decarbonization scenario, the power-to-liquid (PtL) synthesis of renewable jet fuel serves as a reference case. The production of liquid hydrogen can be significantly more efficient and less costly than the PtL reference case as no CO2 is needed, less process steps are required, and no major by-product streams are generated. These advantages can overcompensate the higher cost and the boil-off losses along a representative LH2 supply chain. It is preferable to perform the energy-intensive liquefaction step at the location of the electrolysis plant where renewable electricity is available at a low cost. The logistics chain assumes transport by sea via LH2 carriers and LH2 trailers for inland transport. In this way, it is possible to supply all major airports with LH2 at a reasonable cost.

For the best storage option of hydrogen on board of long-range aircraft, the specific energy of LH2 including the cryotank is crucial. In order to minimize the weight and aerodynamic penalties due to the large tanks required, different tank options, in shape and location, have been investigated in the Hyliner aircraft design where a minimum of two tanks are required for safety reasons. The resulting specific energy including the tank weight is 2.3 times higher compared to a kerosene system. On the one hand, this solution reduces the take-off mass, and on the other hand, potential penalties are outweighed by the ecological advantages of the overall system.

The design of a long-range aircraft in the group design project is strongly influenced by operational changes as well as the choice of energy source. Setting the airspeed to Mach 0.7 allows for significant energy savings while increasing the capacity to 400 passengers permits to keep productivity at the same level. Through the modification of the network structure, parallel flights are combined leading to an improved utilization. The increase in direct connections helps not to expand total travel times for the passenger.

For the resulting aircraft concept Hyliner (2.0), liquid hydrogen (LH2) is chosen as the energy source, which is burned in gas turbines but requires significantly larger volumes on board for storage (up to four times). Since conventional wing tanks neither have the required storage volume nor can meet the extended requirements for thermal insulation and compressive strength, fuselage tanks are used. Such a LH2 aircraft can, due to its reduced weight despite the higher volumes, be designed energy-equivalent to a conventional aircraft of the same technology level.

As part of the project, the fuselage size is enlarged by the extra space and the service options of a third, passenger-friendly deck, leading to an increase in energy consumption of 9 %. In order to minimize this additional energy expenditure, current research at Bauhaus Luftfahrt is focusing on the synergistic saving potentials. Besides a fuselage propulsor, these are the tankless wing and the low flight Mach number, which allow the use of new technologies, e.g., laminar or actively tailored wings with very high aspect ratios.