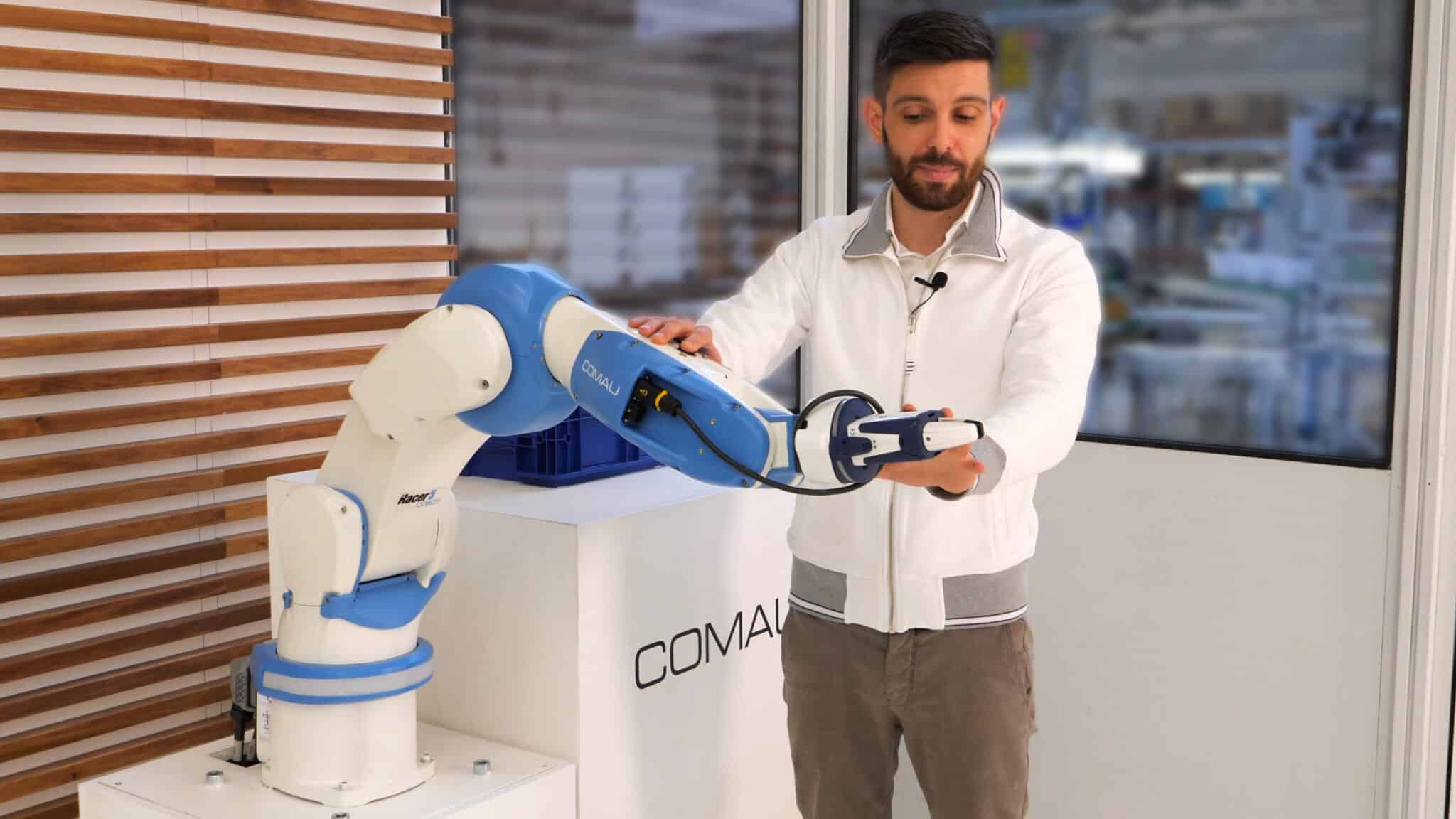 Comau is one of the leading players in automation. Now the Italian company has launched its Racer-5 COBOT, a high-speed, six-axis robot with the ability to switch seamlessly between collaborative and industrial modes. Comau’s Marketing Director Duilio Amico explains how it furthers the company’s drive towards HUMANufacturing:

What is Racer-5 COBOT?

Duilio Amico: Racer-5 COBOT offers a different approach to cobotics. We have created a solution with the speed, accuracy and durability of an industrial robot, but added sensors that allow it to work with humans. A cobot is by its nature slower and less precise than an industrial robot because it needs to cooperate with humans. Its maximum speed is therefore limited to ensure that if it comes into contact with a person no-one is harmed. But we have solved this issue by adding a laser scanner which senses the proximity of a person and prompts the robot to slow to collaborative speed. This allows interaction between humans and the robot to take place in a safe environment. The robot will also stop if it is touched by a human. Software measures the feedback current it gets when it comes into contact and judges whether it is a human contact. The robot can then resume at collaborative speed when the human is near but not touching or continue at industrial speed when they have moved away.

What benefits does Racer-5 COBOT bring?

Duilio Amico: A lot more flexibility. In a standard environment, a robot has to stop completely for a check by a human. This downtime has a cost. You also need safety fences. The beauty of this system is that the workspace is freed of cages that take precious space and time to open and close; people can share working space with a robot without stopping the production process. This ensures a higher standard of productivity than either a standard cobotic or industrial solution. In a typical production environment with a 70/30 combination of human/robot intervention this can improve production time by up to 30%. This allows more throughput and faster scaling up.

Duilio Amico: This is a high performing robot – one of the fastest in the world, with a maximum speed of 6000mm per second. It is ideal for any process with short cycle times: in electronics, metal manufacturing or plastics; anything requiring high speeds, but also a degree of human presence. This is in line with our philosophy of “HUMANufacturing” where we combine pure automation with the dexterity of a human being. It could suit sorting or quality inspections; palletising small items; end-of-line pick and place and manipulation. Racer-5 COBOT has a 5kg payload and 800mm reach so it’s useful for small payloads. We have a couple of applications already developed in the CIM4.0 manufacturing testing and showcase centre in Turin, as well as with some other early adopters, and are working on applications for the food business and warehouse logistics.

Duilio Amico: As yet, this is an unmatched solution. It does not cover all needs: there are many processes that don’t require this level of speed and accuracy. Cobots are becoming more popular anyway because of their flexibility and ease of programming. Growth rates for cobotics are projected to reach double digits in the coming years and we believe that with Racer-5 COBOT we are opening new doors towards a wider collaboration between human beings and machines. We are improving the quality of life for human beings while also improving productivity.

Interested in this cobot?
Request a quote
CobotsIndustrial RobotRobots
Advertisement