Home » Made in Space: Ready For Space Manufacturing?

Made in Space: Ready For Space Manufacturing? 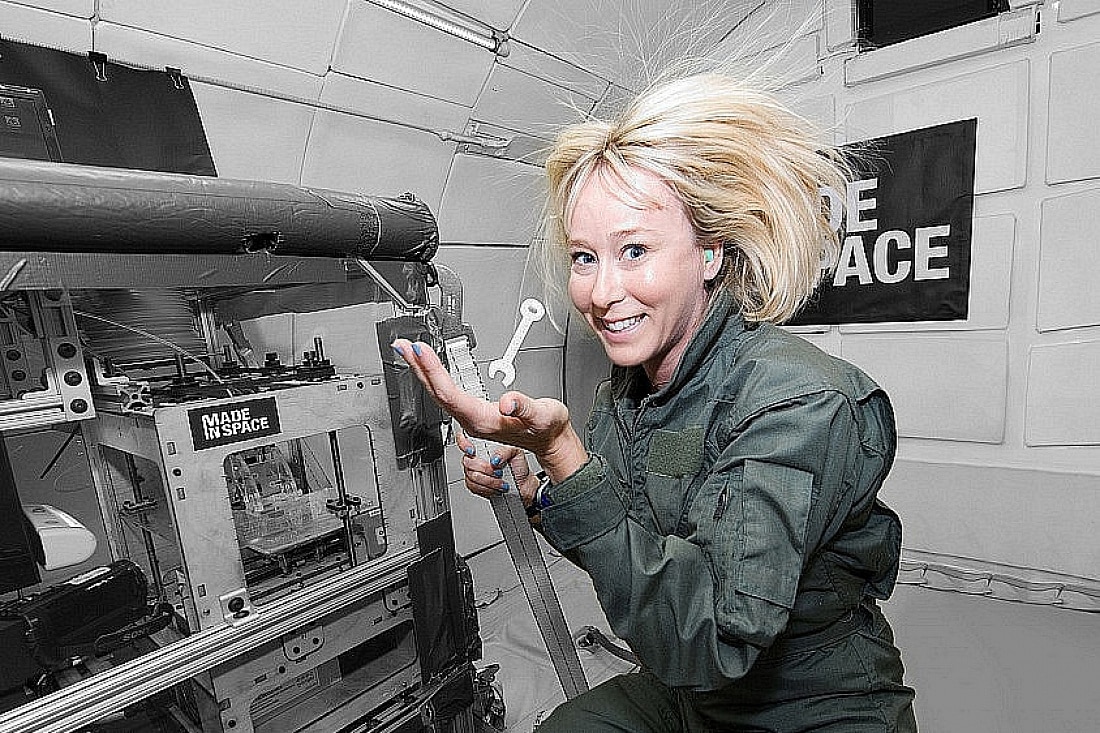 On the 23rd of September 2014, a Made In Space Zero G 3D printer built for NASA was delivered to the International Space Station (ISS) by a SpaceX Dragon cargo ship. By November, astronaut Barry “Butch” Wilmore had set up the melt-deposition modeling 3D printer and began printing a series of calibration coupons and plastic patterns to study how well the specialized 3-D printer performed in a zero-gravity environment. The first off-world 3D print job was completed on Monday, November 24, 2014.

The first 3D printed object in outer space is not only significant as a first in human history, it may hint at a sci-fi future where machines could self-replicate. Though science fiction is often used to excite media narratives around 3D technology, the first 3D printed object in the vacuum of space was a simple printhead faceplate, whose function is to hold internal wiring of the 3D printer’s extruder in place.

ISS astronauts then 3D printed 25 objects from November 17 to December 15. Five off-planet 3D prints were successfully completed in 24 hours on December 6. The infographic below explains a little about each part and shows the dates each print was completed.

While it’s not yet possible to extrapolate the differences between the off-planet 3D prints and the same prints fabricated using the same printer on Earth, there is a plan in motion at the NASA Marshall Space Flight Center to compare them. The material properties will be tested by powerful compressing, twisting, bending and pulling the 3D printed objects, and subjecting them to high-powered microscopic analysis.

A Back Scratcher Made in the Vacuum of Space

The 3D printed ratchet was widely reported in the news as being the first part to be requested by astronauts, and the first to be 3D modeled on Earth by Made In Space in California for the specific purpose of being transmitted by email to the ISS and 3D printed in space by the Zero Gravity 3D printer.

Niki Werkheiser, NASA’s 3D print project manager at Marshall Space Flight Center in Huntsville, Alabama thought the crew would ask for science experiments or science hardware. But the most desired object for astronaut Butch Wilmore was all too human:

NASA has therefore designed a back scratcher for Butch and other astronauts who are currently on ISS to print and enjoy.

After this successful first, the financial benefit of this transaction also became obvious—traditional methods of physically transporting an object into space costs about $17,000 per kilogram.

This success will also influence the next phase of 3D technology’s usefulness both in space exploration and in various processes on Earth. If a printer can successfully print an object beamed via a 3D model to the ISS, the same can be accomplished for seafaring or aeronautical craft traveling in our oceans or in our skies.

After accomplishing 3D printing in a zero-gravity environment inside of the ISS, Made In Space is making progress toward printing on the exterior of the station, which could have dramatic implications for sustained space exploration.

On November 20, NASA’s Space Technology Mission Directorate (STMD) announced a new program to pursue “tipping point” technologies to herald the dawn of a new age in space exploration and commercial endeavors. Made In Space will be working with Northrop Grumman and Oceaneering Space Systems to create the first system for autonomous 3D printing and assembling of large structures in space. No astronauts will be needed, says Andrew Rush, president of Made In Space:

Our free-flying manufacturing and assembly device, designated Archinaut, will transform space capabilities for NASA and other government organizations as well as both pre-existing satellite manufacturers and emerging commercial space players.

Made In Space is also working on a next-gen 3D printer that is as big as a toaster oven. It will have a 10 x 10 x 20 cm build volume and will print in HDPE, ABS, and PEI/PC materials. They will continue to push their printer to incorporate more complex operations like multi-material printing.

Combining On- and Off-World Printing

Made In Space is partnering up with NanoRacks to develop an orbital construction and deployment service for CubeSats. The plan is to combine traditionally manufactured CubeSat components with ones 3D printed in space. The CubeSats will also be assembled and deployed from the ISS.

In June 2015, the European Space Agency (ESA) announced that it had successfully completed 618 ignitions and fired its spacecraft thruster built with a 3D printed nozzle and platinum combustion chamber.

The ESA has also built its own Portable On Board 3D Printer and was scheduled to send it up to the ISS in June of 2015. But the ESA is not a newcomer to the field—the agency has been studying the potential benefits of industrial additive manufacturing for years, having first made headlines in 2009 for 3D printing a titanium test copy of a stainless steel water on-off valve (WOOV) that flew aboard ESA’s Columbus module of the International Space Station in 2009.

From the recent 3D-Printed Habitat Challenge to SpaceX’s next generation SuperDraco engine to the ESA’s experiments with 3D printers and 3D printed components and habitats, as well as the experiments of Made In Space and NASA, it is easy to see how 3D technology and space exploration are proving to be a potent force, one that is capable of realizing our most fantastic design and engineering feats, and one that will surely push humans beyond every explored horizon.