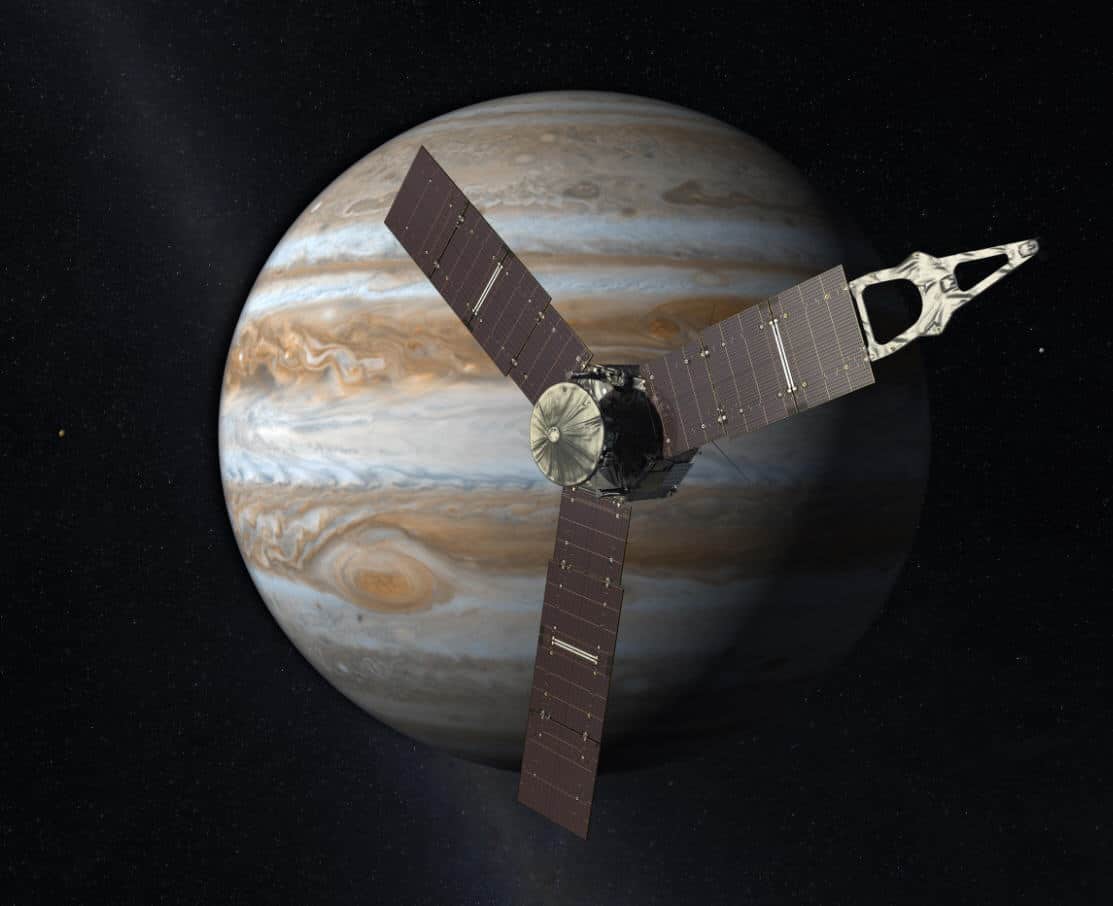 The NASA probe’s arrival at Jupiter on Monday will improve our understanding of not just the solar system, but also of solar power. It could also show the way to a nuclear-free solar system.

NASA’s Juno spacecraft has traveled farther than any other solar-powered probe. It became the first to reach Jupiter when it initiated its 33-orbit tour of the gas giant on Monday, July 4. Over the next 20 months, astronomers will learn about Jupiter’s atmosphere and, for the first time ever, the planet’s interior below the clouds. But the five-year journey from Earth has already taught us much about solar power.

Launched in 2011, the four-ton spacecraft has three large solar panels. Each nine-meter-long panel contains a staggering 18,698 individual solar cells made from silicon and gallium arsenide. They generated around 14 kW of electricity when Juno left Earth. It was still generating power two years later when Juno flew by Earth to get a gravity assist, resulting in a huge 14,160 kph boost in velocity. However, output has dropped drastically since, explains Rick Nybakken, Juno’s project manager at NASA’s Jet Propulsion Laboratory in California:

Jupiter is five times farther from the Sun than Earth, and the sunlight that reaches that far out packs 25 times less punch. Our massive solar arrays will be generating only 500 watts when we are at Jupiter. But Juno is very efficiently designed, and it will be more than enough to get the job done.

Five hundred watts is just enough to power five typical light bulbs, and less than the power consumed by a hair dryer. So how will Juno function?

Juno is now 832 million kilometers from the Sun, which is 5% farther than any other solar-powered space vehicle has operated. To make it operational at this distance, the Florida solar array manufacturer Astrotech employed large, super-efficient solar cells. Although they’re off-the-shelf products, twice as much glass was used to protect against the extremely high radiation levels around Jupiter.

The probe’s scientific instruments are designed to operate on low power. Only half the 500 watts Juno generates is needed to keep its instruments at optimum temperature, with the rest used for propulsion, communications, cameras and computers.

In addition, the decision to put the probe into a polar orbit to avoid Jupiter’s shadow was a critical part of making the mission possible. While Juno’s huge solar panels are far from the Sun, they operate 24/7 to maximize electricity generation.

Towards a Nuclear-Free Solar System?

Unlike Curiosity and the Cassini probe to Saturn, Juno is the first probe that doesn’t rely on a plutonium power source. There’s a good reason for that. Although the US government produced additional amounts of Pu-238 earlier in 2016, Juno was designed when the radioactive isotope was in very short supply.

However, relying on solar power hasn’t hampered the spacecraft. Juno was traveling at a velocity of about 26.9 kilometers per second relative to Earth until it slammed on the brakes to orbit Jupiter. It will have covered 2.8 billion kilometers by the end of its mission.

Although Pu-238 will likely be part of NASA’s future, Juno’s unique solar features will be incorporated into subsequent robotic space missions. Due to launch in 2022, the ESA’s Jupiter Icy Moons Explorer will examine Europa, Ganymede and Calisto on solar power alone, as will NASA’s Europa mission, due for launch during the 2020s. Juno’s accomplishments could lead to nuclear-free space exploration.