Home » Behind the Logo: The Origin of Bluetooth

Behind the Logo: The Origin of Bluetooth 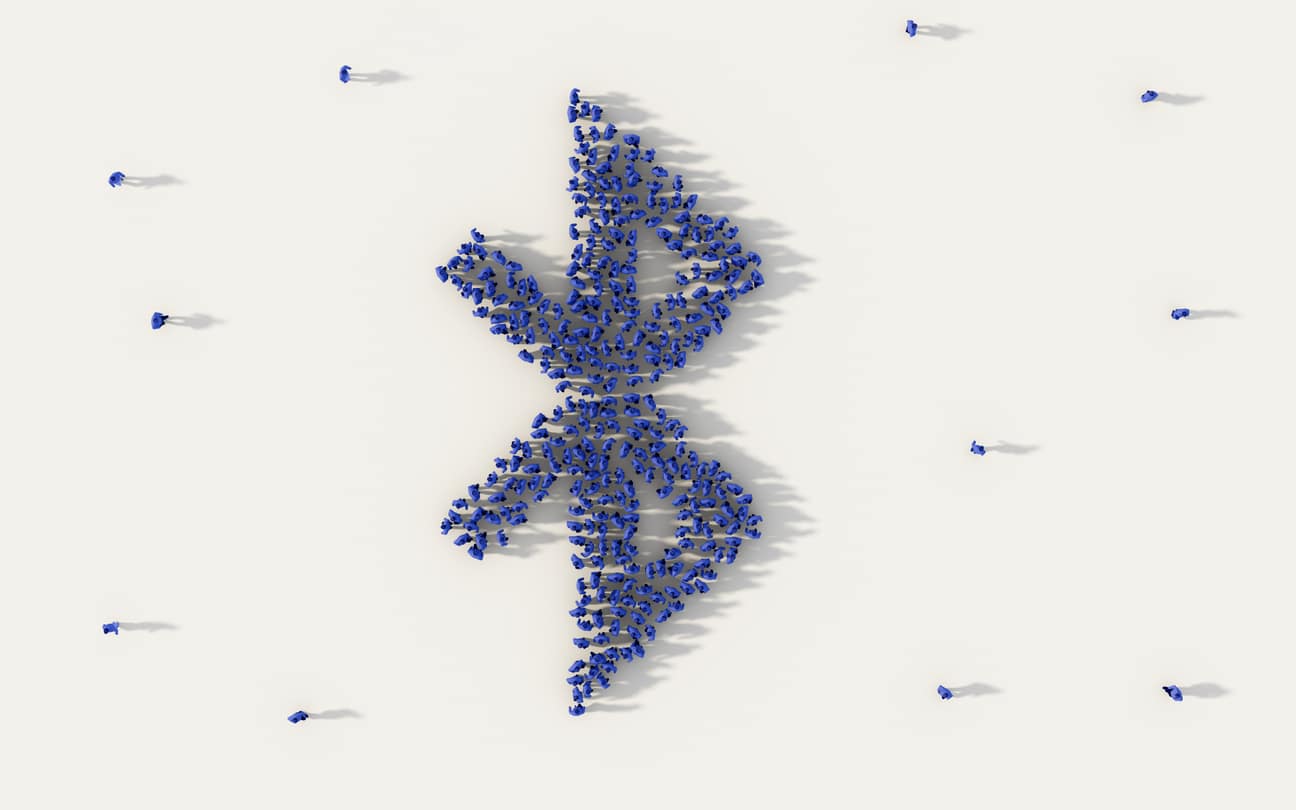 We activate Bluetooth every day on our phones, our computers, our tablets, at home, at the office or at the factory. Its logo is recognizable between thousands. But what is the origin of this technology and what do its name and logo mean exactly?

Bluetooth is 25 years old and is now deeply embedded in our culture. We rely on Bluetooth wireless technology to free us from the constraints of wired technologies, both in our personal and professional lives. But a few people know exactly what it means. So what is the story behind the Bluetooth logo?

Origin of the Name: King Bluetooth

According to the Intel website, the name Bluetooth comes from a 10th century Viking king who had bad teeth. King Harald Gormsson, that’s his name, was known for having dark blue teeth and was nicknamed “Blåtand”, Bluetooth in English (“blå” for blue and “tand” for tooth).

King Harald was also known for unifying in 958 the kingdoms of Denmark, Norway and different tribes that until then spent their time fighting each other. He is therefore a unifying king of opposing tribes. And this is precisely the purpose of Bluetooth technology which allows the intercommunication of different devices that normally are incompatible.

A Collaboration Between IT Companies

The choice of the name dates back to 1996. At that time, IBM, Intel, Ericsson, Nokia and Toshiba were involved in a large-scale project to develop a short-range radio technology that allowed communication between different devices and industries. The engineers were looking for a good code name and one of them, Jim Kardarch from Intel, came up with the word Bluetooth explaining his choice:

‘King Harald Bluetooth was famous for uniting Scandinavia just as we intended to unite the PC and cellular industries with a short-range wireless link”.

Originally, the code name Bluetooth was supposed to be temporary. The engineers were thinking of replacing it with “RadioWire” or “PAN” (Personal Area Network). But these names already had tens of thousands of occurrences on the Internet, making Bluetooth the one and only exclusive solution.

Origin of the Logo: Initials H.B.

And now, what is the meaning of the logo? The logo was inspired by the runic alphabet, which was used by the Scandinavian and Germanic peoples from late antiquity to the Middle Ages. The initials of the Danish king Harald Blåtand, the letter Hagall (ᚼ) and the letter Bjarkan (ᛒ), were taken from the alphabet and combined to form the famous symbol we all know today.

The Bluetooth standard was officially launched in 1998 and the first Bluetooth mobiles were designed by Ericsson in 1999.

How is Bluetooth Tech Used in Industry?

Today, Bluetooth technology is widely used for connecting earphones and speakers to smartphones. But the technology has also found various applications in industry with the development of the Internet of Things. The growth of data-driven sensors and the increase in the use of mobile devices in plant operations have contributed to making Bluetooth a very advantageous and cheap wireless technology, explained Frédéric Aguilar, Technical Director at Extreme Networks.

“Faced with the multiplicity of connected devices, the demand for network localization services, such as Wi-Fi access points and BLE (Bluetooth Low Energy) beacons, is growing today.”

New devices specifically designed for industrial purposes increasingly embed Bluetooth capabilities. Forte Data Gloves from BeBop Sensors is one example. The technology, which offers a hands-on experience and sensation of “touch” within a VR environment for customers in the industrial and automotive sectors works with Bluetooth, explains Keith McMillen, the company CEO:

“BeBop Sensors Forte Gloves are wireless. They work for eight hours on a single charge via USB and can communicate via Bluetooth; one size fits all; they’re light and the sensors are super sensitive and accurate.”

“What’s interesting is that it’s really small. And for a small amount of money, you can get basic operational data like temperature, magnetic field and vibrations. The data is sent quickly and wirelessly via Bluetooth to a smartphone app. That helps maintenance teams react quickly and prevent outages. You just plug it in to start gathering data. There’s no cabling and you don’t have to integrate it into your control system. It’s very simple to get your “dumb” motors data up into the cloud for analysis.”