Home » Airbus Turns its A400M into a Water Bomber

Airbus Turns its A400M into a Water Bomber 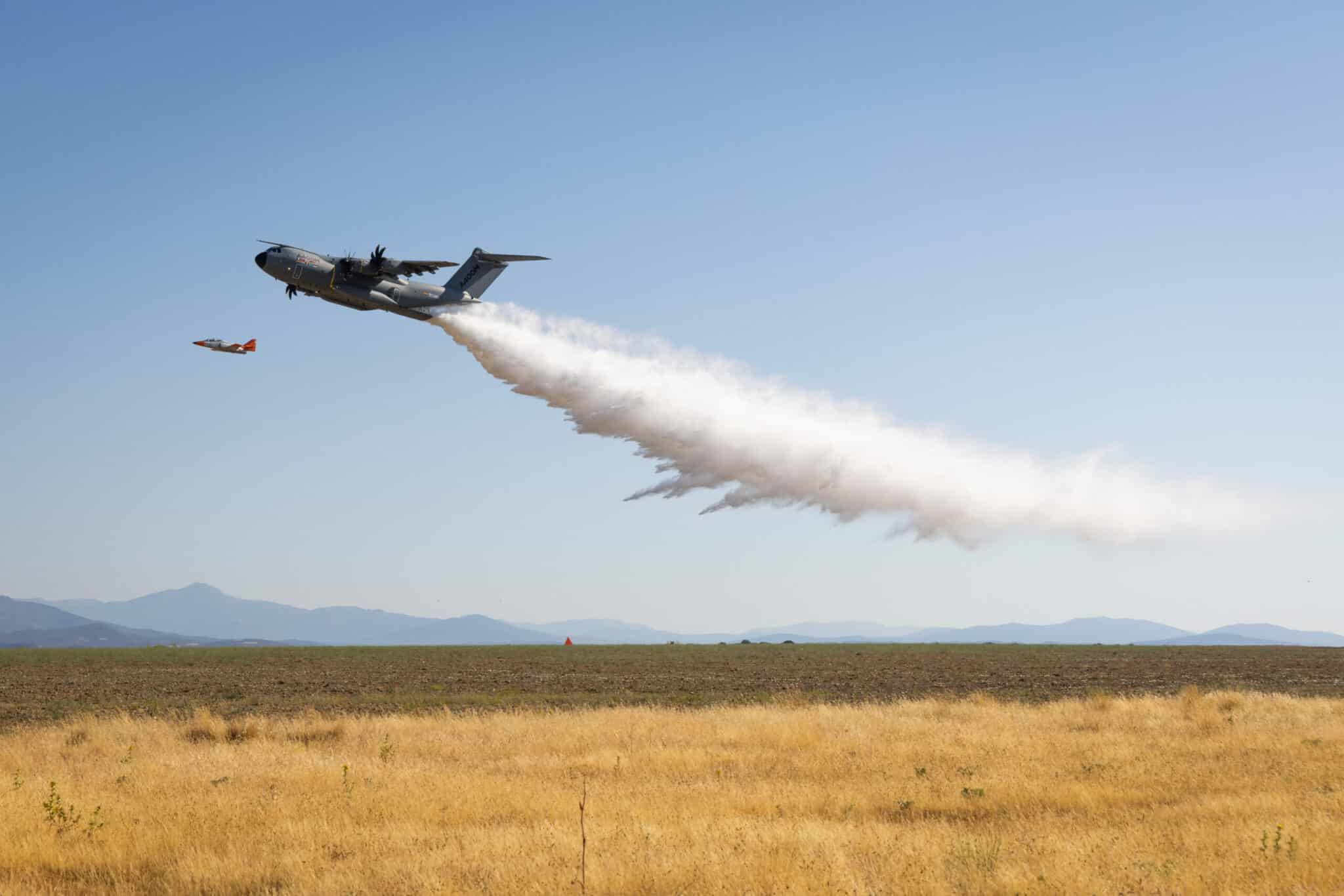 The European aircraft manufacturer has announced yesterday it has successfully carried out tests in Spain to transform an A400M into a water bomber. The military plane was able to drop three times more water than a Canadair. This innovation will be of great help in fighting the fires that are raging all over Europe and particularly in France.

The A400M is traditionally used for transporting goods, troops, paratroopers, and even helicopters. This same aircraft was previously used for the repatriation of thousands of Afghan nationals after the takeover of Kabul by the Taliban in August 2021.

But last week, in Spain, the military plane successfully turned into a water bomber, capable of dropping more water on fires than any Canadair. These tests were carried out in collaboration with the 43rd Squadron of the Spanish Air Force, which specialized in the fight against forest fires.

Equipped with a roll-on/roll-off conversion kit that required no modification to the aircraft, the A400M dropped 20 tons of water in ten seconds at low altitude (45 meters / 150 feet) and low speed (230 km/h / 125 knots). In comparison, a Canadair is only capable of dropping 6 tons of water.

In a statement, Mike Schoellhorn, CEO of Airbus Defence and Space said:

“The development of this firefighting kit is an intrinsic part of our journey towards helping to create a more sustainable and safer world, not only by our actions but also through our products. We strongly believe the A400M can play a vital role in the fight against the ever increasing threat posed by wildfires and support the restoration of social and environmental systems.”

An Innovation For Firefighting

Under the effect of global warming and recent heat waves, fires are multiplying everywhere this summer in Europe. In France, since mid-July, tens of thousands of hectares of forest have gone up in smoke in the west of the country. And French firefighters have had a hard time coming to the end of the flames. Above all, they realized that their current equipment was insufficient.

France currently has 19 water bombers (12 Canadair CL-415 and 7 Dash 8-Q400) but this fleet is old. Airbus’s innovation could supplement these existing airborne resources, and even replace parts of the aging fleet, for better firefighting.

However, unlike a Canadair, which is capable of hedge hopping to take water from a water supply or from the sea, the A400M can only discharge the water that was previously loaded into water tanks.

The solution is simple. The plane is equipped with two tanks that have a capacity of ten tons each. These tanks are installed in the hold of the aircraft and are connected to two huge pipes that exit through the rear ramp of the aircraft.

The great advantage of this innovation is that it can be adapted to any A400 M in service. Indeed, the added kit does not require any modification to the aircraft and can quickly be deployed, as explained in the statement:

“The Airbus firefighting solution created for the A400M is a roll-on/roll-off (RORO) kit that requires no modification to the aircraft and therefore is interchangeable to any aircraft in the A400M fleet. The water is stored in a fixed tank in the cargo hold, and retained by two independent doors. These doors are connected to two flood pipes, so when the discharge is triggered, the water is expelled through two sections at the end of the ramp. The introduction of this RORO solution allows a rapid reaction to unforeseen fires and reconfiguration of the aircraft to any of its other roles.”

Tests are not finished yet. Airbus expects to experiment its A400M water bomber on a night mission soon, something a Canadair is not capable of.