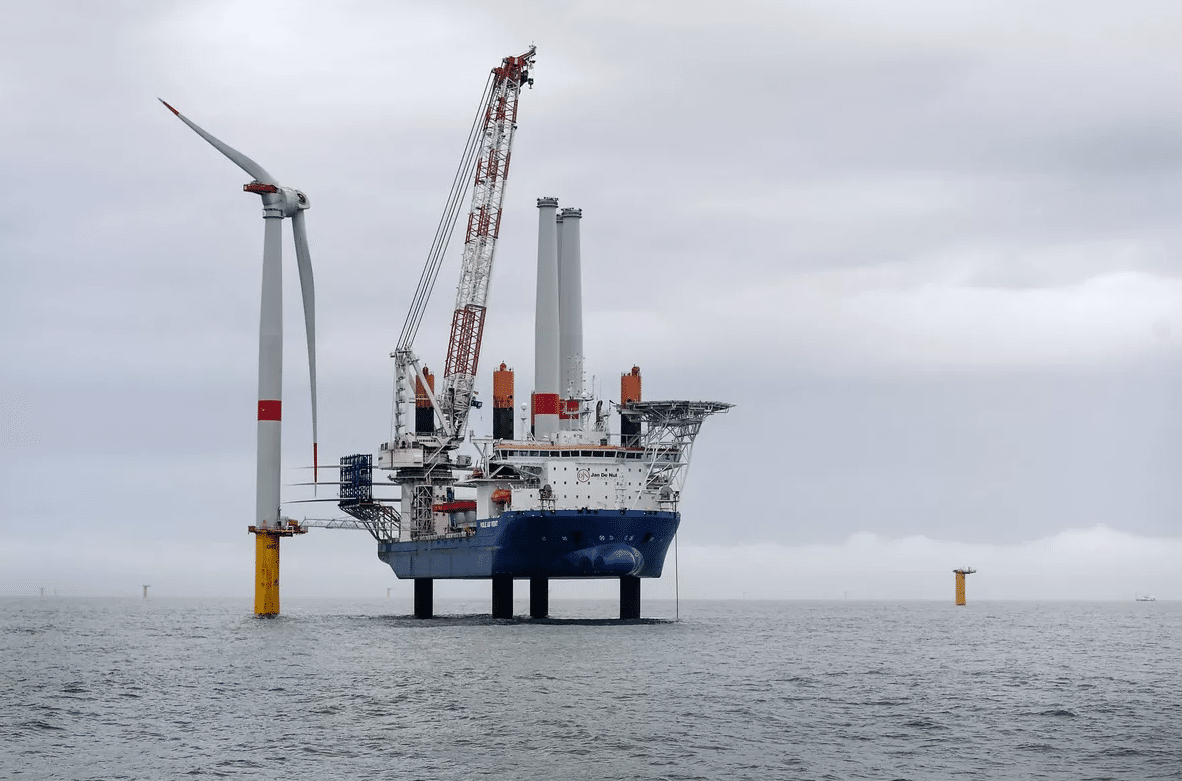 France’s first offshore wind turbine is now standing some 15 km away from the French coast and will start operating next May. Manufactured by GE Renewable Energy in its French factory, the 180 meters high wind turbine named Haliade is one of the 80 wind turbines that will progressively be installed by the end of the year when the farm will be fully operational. Yesterday, the company communicated this news via Twitter.

The installation of the wind turbine requires the use of an offshore jack-up installation vessel Vole au Vent which belongs to Jan De Nul, the company in charge of installing the turbine.

The massive vessel, mounted on four legs, carries the components of the wind turbines (the turbines are installed four by four), from the port to the offshore wind turbine foundations. The components include 4 towers, 12 blades, and 4 nacelles. Then, the 1,500-tonnes crane of the vessel will mount each part on top of monopile foundations.

The turbines are connected to an electrical underwater station via a semi-buried cable that is already in place. This will enable the transmission of the current generated by the turbine back to the ground.

24 hours are needed to mount one turbine. Planting 4 turbines during each mission will approximately take around 5 days, depending on the weather conditions. According to Jan De Nul, the 80th and last turbine is expected to be mounted in Autumn 2022.

Located between 12 km and 20 km off the coast of the Guérande peninsula in western France on a surface of 78 km², the Saint-Nazaire offshore wind farm is expected to produce the equivalent of the electricity consumption of 700,000 inhabitants.

The farm is developed by French company EDF Renouvelables which predicts the farm will have a capacity of 480 MW, with the ability to power 20% of the French Department Loire Atlantique.

Other Offshore Wind Farms Under Construction

While France’s neighboring countries such as the United Kingdom and Germany already have dozens of offshore wind turbines, France was lacking behind. But last February, French President Emmanuel Macron set the objective of equipping France with some 50 offshore wind farms to “aim for 40 gigawatts in service by 2050.” France’s goal is to achieve the target of 40% renewable energy by 2030 and carbon neutrality by 2050.

To achieve these very ambitious objectives, other offshore wind farms are already under construction in France. The one in Fécamp (Seine-Maritime) is due to be operational in 2023. In the Mediterranean Sea, projects are also on their way. A park will be set up about 20 kilometers off the coast of Port-la-Nouvelle (Aude) while another one should also be built about twenty kilometers from Fos-sur-Mer near Marseille.