Home » How Do You Drill a Million Holes?

How Do You Drill a Million Holes? 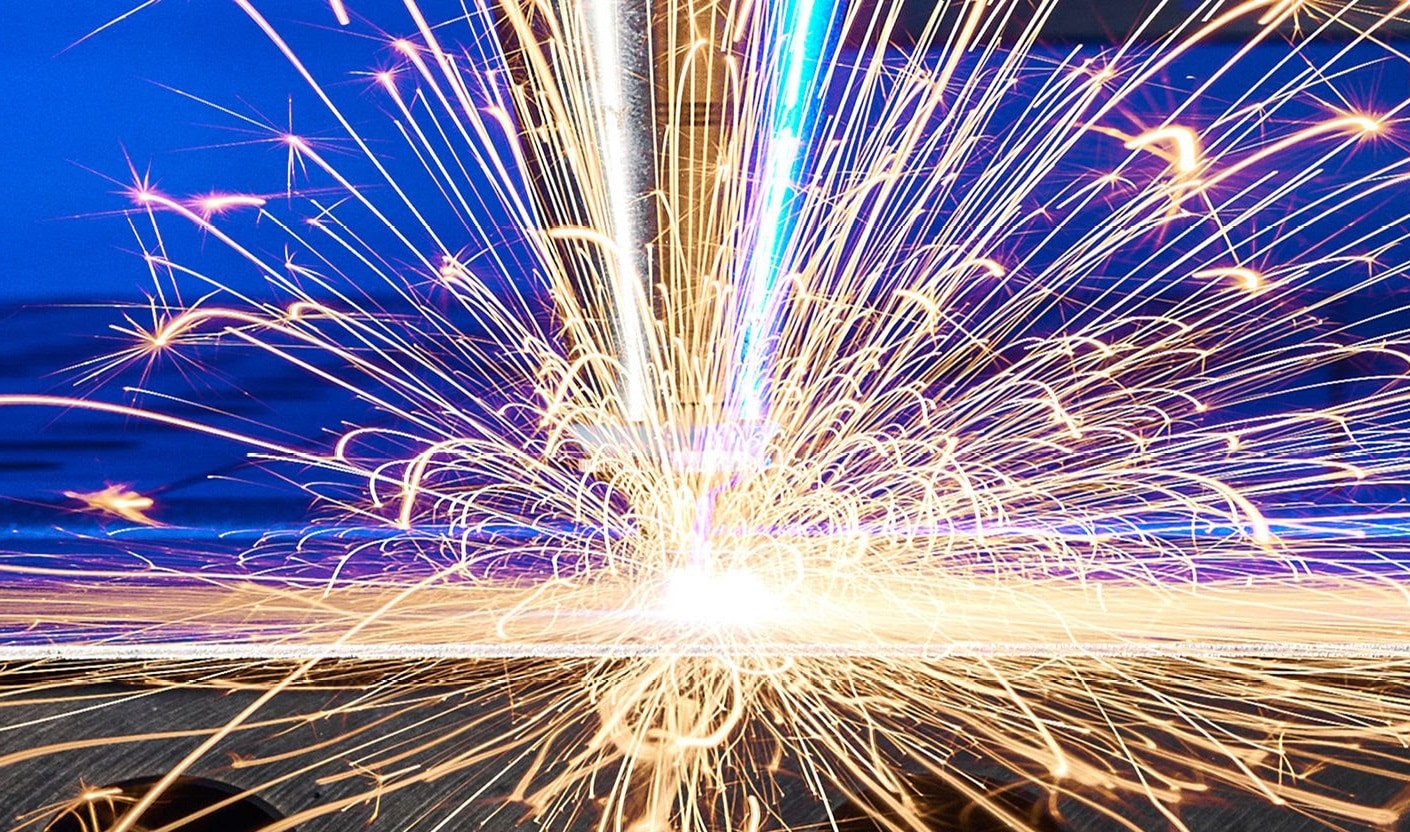 The laser is the tool of choice when it comes to drilling a large number of similar holes next to each other. But which laser system is the fastest? And which drilling process delivers the most appropriate results? The Fraunhofer Institute for Laser Technology ILT has been developing and testing the technology for such processes for decades. The following article provides an overview of how to approach these questions.

Who Needs So Many Holes?

Even though the pandemic has reduced air travel for the time being, the aircraft industry is under considerable pressure to further reduce fuel consumption. The principle of “Hybrid Laminar Flow Control” provides it with the opportunity to do just this: The air flows around an aircraft wing with less resistance if its surface has many small holes. Fuel savings of up to 10 percent are possible in this way.

The situation is similar with aircraft turbines, where small holes help to dampen engine noise. A third example is filter technology. Here, metal foils with holes in the micrometer range can efficiently filter microplastics out of wastewater. These three examples show quite well that there are many holes to be drilled in very different areas. Turbine construction, paper production or plastics recycling are areas with great potential.

How to Drill with the Laser?

The laser has now been in industrial use for several decades, and the applications are correspondingly diverse. In addition to marking, welding and cutting, lasers are also commonly used for drilling. From a scientific point of view, laser drilling is a non-milling thermal cutting process. Image 1 shows four different ways to drill holes with a laser. The trade-off between high speed and high precision plays a crucial role in the selection.

Of course, the fastest way is to “shoot” the holes through the material with single pulses. Helical drilling takes the longest, usually even requires special optical systems, but offers high precision in return. Percussion drilling involves placing multiple pulses at the same point to laser a hole through the material. Trepanning is when the hole is cut out by tracing the contour of the hole after a smaller hole has been initially drilled.

Of course, the precision of the drill hole and smoothness of its walls also depend on the material and the type of laser radiation. Since copper, for example, absorbs green and blue radiation much better than common infrared, it is better processed with this type of laser.

Pulse duration and pulse energy also influence the result, and this is where the ultrashort pulse (USP) lasers are something very special: They apply the laser energy in an extremely short time, converting the material into plasma almost instantaneously. As a result, USP lasers can process virtually any material, offer excellent surface quality, but also need the longest time to drill the hole.

Fraunhofer ILT has been investigating and optimizing all of these processes for years. This work has resulted in highly productive drilling processes that can produce tens to hundreds of holes per second. The great challenge here was to maintain low tolerances of the hole diameters and a high surface quality even at high productivity (drilling rate). Here, the institute uses the well-known “on-the-fly” (OTF) single-pulse drilling process as well as an OTF percussion drilling process developed at Fraunhofer ILT.

Example 1: Single-Pulse Microdrilling with the Laser

The most productive drilling process in the above list is drilling with single pulses. It should always be noted that the speed of the process and the hole quality must be balanced. If the optical assembly moves too fast over the surface, the hole will become elongated. The quality of the drill hole can be evaluated according to various parameters:

At Fraunhofer ILT, the process was optimized so that 200 holes per second could be drilled in 1 mm thick titanium sheet. For this purpose, a single-mode laser was used, which can generate a focus diameter of only 12 µm, to produce holes with a diameter of just under 80 µm.

Drilling was performed “on-the-fly,” i.e. with a constant feed rate of the optical system relative to the workpiece. Using the optimized process parameters, the institute was able to machine a 2 meter long 3D-molded demonstrator of an aircraft wing on a 6-axis system. At a speed of 200 holes per second, about 2 million holes per square meter were drilled on an area of about 2 m² in less than three hours. The diameter of the holes was 80 µm. It was also important to precisely control the distance between the optical systems and the workpiece. Optical coherence tomography (OCT) was used to monitor this, as OCT is not affected by plasma or splashes and achieves a measuring accuracy of only a few micrometers.

Example 2: “On the Fly” Percussion Drilling

Not all holes can be drilled with single laser pulses: for example, those with higher aspect ratios, higher demands on the drill hole quality or an inclination of the hole. These can be achieved with percussion drilling. Larger hole diameters are another application for OTF percussion drilling. In this process, multiple laser pulses are fired into the same hole. It is obvious that the feed rate plays an even greater role here: The hole must be finished before the optical system moves on, otherwise the hole will be skewed, or the laser will not be able to penetrate the material at all.

The duration needed to drill a hole depends on the number of laser pulses required and the repetition rate of the laser. The drilling process itself is more complex than with a single pulse. By the time the hole is drilled, the individual laser pulses must be strong enough to drive the material further out of the hole because, depending on the process parameters, the melt can remain in the hole and solidify, shadowing the laser or even closing the hole.

Fraunhofer investigated this in detail and developed an OTF process for a percussion drilling. By using a new fiber laser beam source with up to 20 kW peak pulse power and 2000 Hz repetition rate, the institute was able to generate up to 30 holes per second in 2 mm thick aluminum.

Bore diameters of 500 µm were produced with a high degree of precision. The standard deviation was less than 5 percent at the inlet and even less than 2.5 percent at the outlet. The high pulse peak powers and repetition rates of the new laser sources made it possible to drill precise holes at high productivity.

And If That’s Not Enough?

Laser and process technology is constantly evolving, and so further advances in laser drilling can also be expected in the coming years. In terms of beam sources, ultrashort pulse lasers with higher powers are on the rise. They have two major advantages: On the one hand, USP processing generates drill holes that are more precise, free of defects, or simply smoother. On the other hand, USP lasers can process practically all materials. So far, this has been offset only by a significantly lower working speed. In the Fraunhofer Cluster of Excellence Advanced Photon Sources CAPS, experts from several Fraunhofer Institutes are currently developing beam sources with power levels well in excess of 10 kW, as well as the necessary process technology. They should also solve the current problem of the low productivity of USP lasers.

Such powerful laser beam sources also enable the use of multi-beam optical systems. Among other things, they make it possible to drill hundreds or thousands of holes in parallel. In the SimConDrill project, filter plates for wastewater filters with millions of 10 µm holes have already been drilled in this way. With such small holes, the filters can be used in public wastewater plants to trap microplastics down to the range below 10µm.

Overall, the technology of laser drilling is undergoing dynamic and fascinating changes. New processes are being developed, and increasingly powerful lasers are opening up new possibilities in terms of achievable drilling geometries and productivity. In particular, the great advances in USP beam sources will enable many new and exciting applications in laser drilling in the coming years. Fraunhofer ILT develops know-how from basic research and applies it to industrial uses and system development.

At this year’s LASER WORLD of PHOTONICS in Munich from April 26 – 29, 2022, experts from Fraunhofer ILT will present the spectrum offered by UKP technology in the field of laser drilling: Fraunhofer joint booth in hall A6.441.