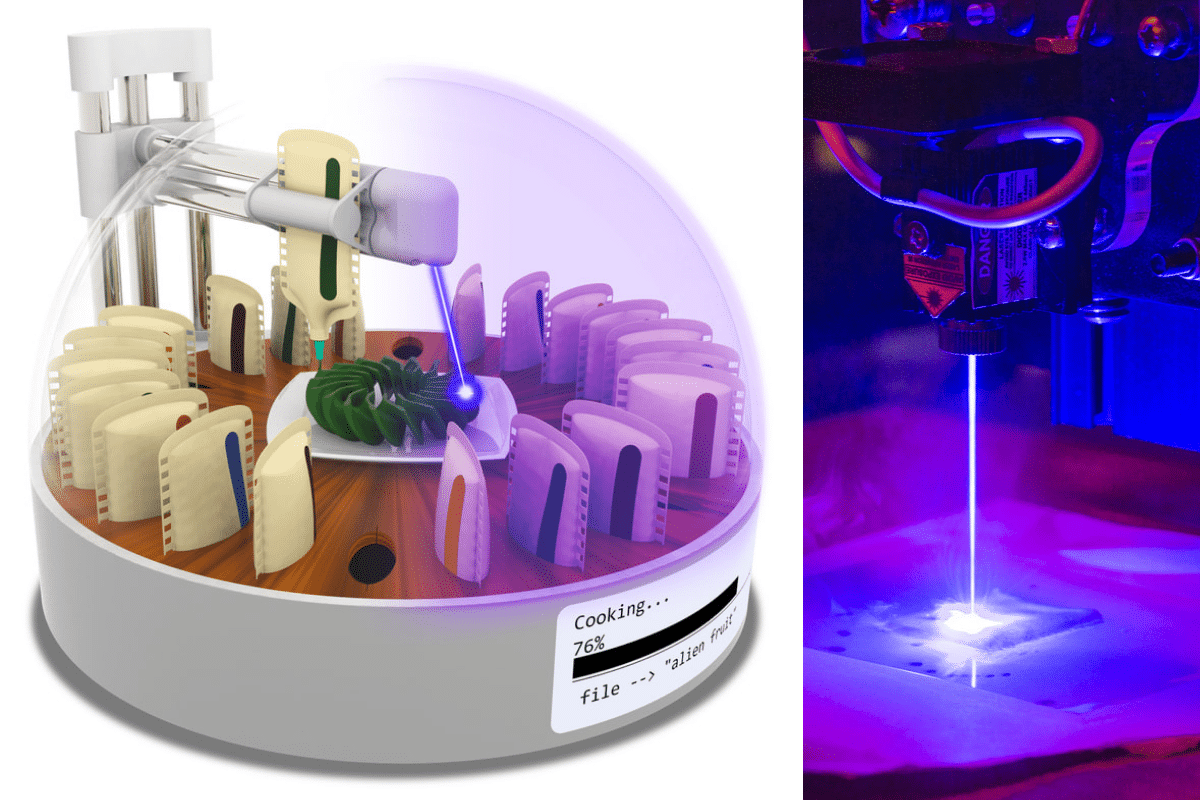 Researchers at Columbia University have developed the first food-cooking printer. The prototype uses lasers for cooking and 3D printing technology for assembling foods. The result is that the food that is cooked is better and tastes just as good as when traditionally cooked.

New technology is now making it possible to produce food using a number of alternative methods. 3D printing is one of the most widespread techniques with food printers in use since 2007. Food printing has indeed been explored by researchers and by several commercial companies. One of the most famous ones is Barcelona-based Natural Machines which released Foodini, a 3D food printing kitchen appliance.

But if food printing has been around for more than a decade, it had never been coupled with a cooking system. A team of researchers at Columbia University has developed a prototype that 3D prints and cooks food, thanks to multiwavelength lasers. The study was published on September 1, 2021, in npj science of food.

The “Digital Food” team is under the guidance of Mechanical Engineering Professor Hod Lipson at the Creatives Machine Lab. For Jonathan Blutinger, a Ph.D. in Lipson’s lab,

“We noted that, while printers can produce ingredients to a millimeter-precision, there is no heating method with this same degree of resolution. Cooking is essential for nutrition, flavor, and texture development in many foods, and we wondered if we could develop a method with lasers to precisely control these attributes.”

The team tested different ways of cooking a chicken, by exposing it to blue light (445 nm) and infrared light (980 nm and 10.6 μm). They were able to print chicken samples (3 mm thick by ~1in2 area). The engineers also took a range of parameters into account, including color development, moisture retention, and flavor differences between laser-cooked and stove-cooked meat. What they discovered is that laser-cooked chicken shrinks 50% less than stove-cooked chicken and retains double the moisture content. What is even more surprising is that the laser-cooked chicken shows similar flavor development to conventionally cooked meat.

“Our two blind taste-testers preferred laser-cooked meat to the conventionally cooked samples, which shows promise for this burgeoning technology.”

This technology is, according to the researchers, accessible as the hardware and software are low-tech. However, the team points the fact that they is not a “sustainable ecosystem yet” to support this new tech

According to Professor Lipson :

“What we still don’t have is what we call ‘Food CAD,’ sort of the Photoshop of food. We need a high-level software that enables people who are not programmers or software developers to design the foods they want. And then we need a place where people can share digital recipes, like we share music.”