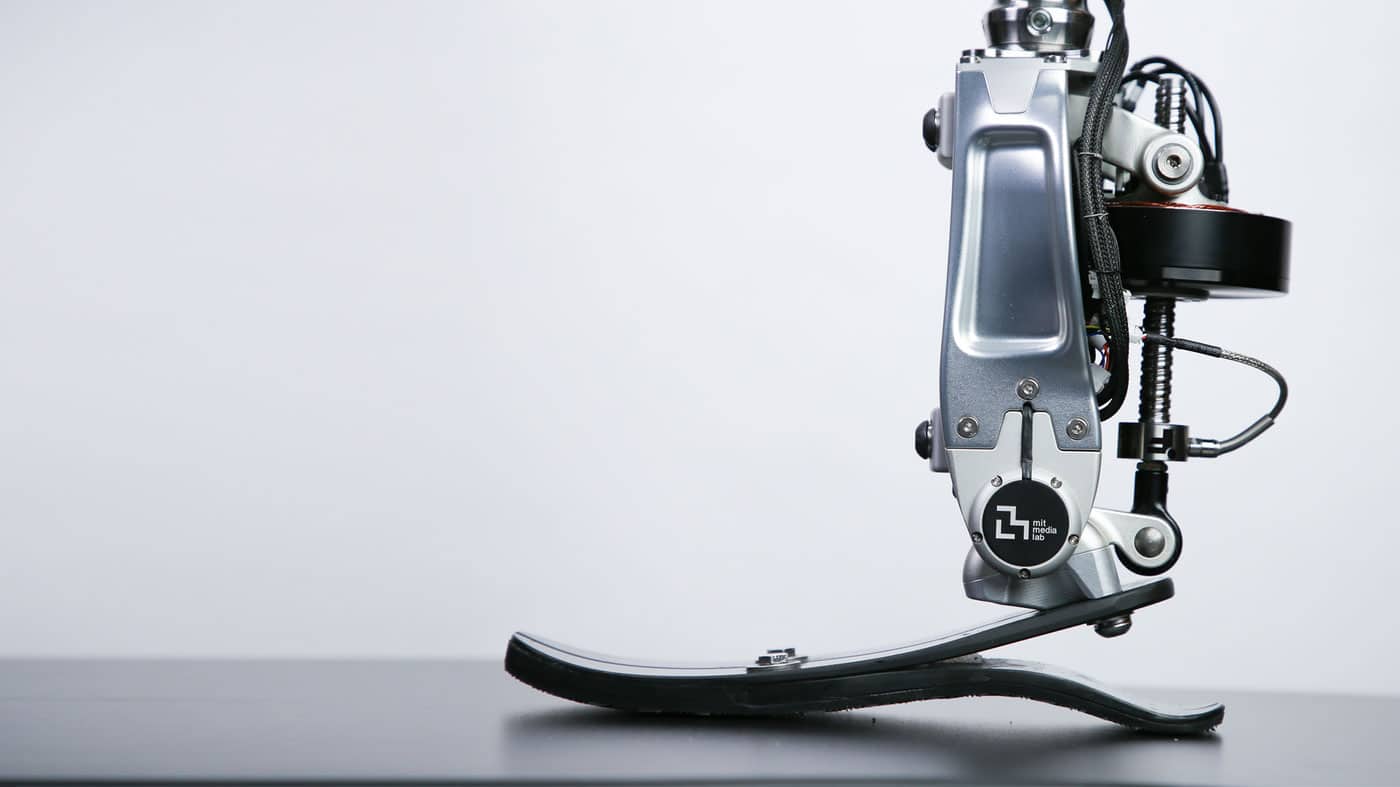 Developed by Matthew Carney of MIT Media Lab’s Biomechatronics group, the revolutionary TF8 actuator is a powered prosthesis. Rather than employing a one-size-fits-all design, it is able to replicate the kinetic and kinematic functionality of the human ankle – moving and responding to force in a lifelike way.

The robotic ankle is driven by an MIT-developed reaction-force, series elastic actuator (FRSEA). In conjunction with FUTEK’s LCM300 load cell, the actuator allows for the wearer’s weight and gait to handle varied terrains such as stairs and inclines.

The prosthetic ankle is neurally controlled thanks to a new MIT-developed amputation technique. This relocates the muscles and some nerves to above the amputation zone, instead of removing them. Sensors in the prosthetic read the signals from these muscles and can transmit sensations to the nerves.

These preserved muscles and nerves, which once controlled the leg, now allow neuromuscular bi-directional communication between the prosthesis and its wearer. As a result, the wearer experiences an artificial lower leg that feels real, as they can sense the ankle’s movements.

“To attempt to fit within the confines of the human form, and to match the bandwidth and power density of the human body, we must push the bounds of every discipline: computation, strength of materials, magnetic energy densities, sensors, biological interfaces, and so much more. At the most fundamental level, we are trying to eliminate disability. We want to develop technologies that allow there to be no difference between disabled people, and someone of a normative body type.”

The prosthetic ankle relies on FUTEK’s LCM300 strain gauge load cell for its force measurement. It was chosen due to its small footprint, lightweight, high accuracy and easy installation.

A load cell is a transducer that converts force into measurable electrical output. In this case, the load cell allows the robotic ankle to determine exactly how hard it needs to push to assist the wearer, says FUTEK business development manager Ehsan Mokhberi.

“Touch is the most important of the five senses when it comes to prosthetics, exoskeleton, robotics and automation. Our sensor is technically bringing the sense of touch to the robotic ankle.”

People do not consciously think about how much force their body applies when undertaking simple tasks like walking. The brain makes these calculations automatically based on feedback from the body. FUTEK’s load cell allows the robotic prosthesis to provide the same feedback to the brain.

The lightweight LCM300 strain gauge load cell is only 30 mm long and 12 mm wide, weighing 42.5 gm. It is accurate to within 0.25 percent of the rated output.

“One benefit of this precise load cell is that it measures the force immediately, responding in milliseconds, to ensure the ankle can perform seamlessly in real time. The result is a closed feedback loop which allows the wearer and the robotic ankle to act as one, offering much more natural movement than a traditional prosthesis.”

Precision CNC machining allows FUTEK to consistently produce sensors with the very tight tolerances required for robotic and biomechanical applications. Its sensors can measure force, pressure and torque directly, plus they can also indirectly measure aspects like flow, viscosity and occlusion. The medical and medtech market is an expanding field for FUTEK, accounting for around 30 percent of its business and growing each year. Beyond powered prostheses, FUTEK’s sensors are also found in exoskeletons and robotic arms including surgery robots. Other important sectors include aerospace and defense, manufacturing and automotive.

“We are known for miniaturization and offering a variety of sensor designs, geometries and mounting configurations – allowing us to support almost every industry. Working with MIT Media Lab shows exactly how much potential there is for this kind of technology to change people’s lives.”