Home » Robots with a Gentle Touch

Robots with a Gentle Touch 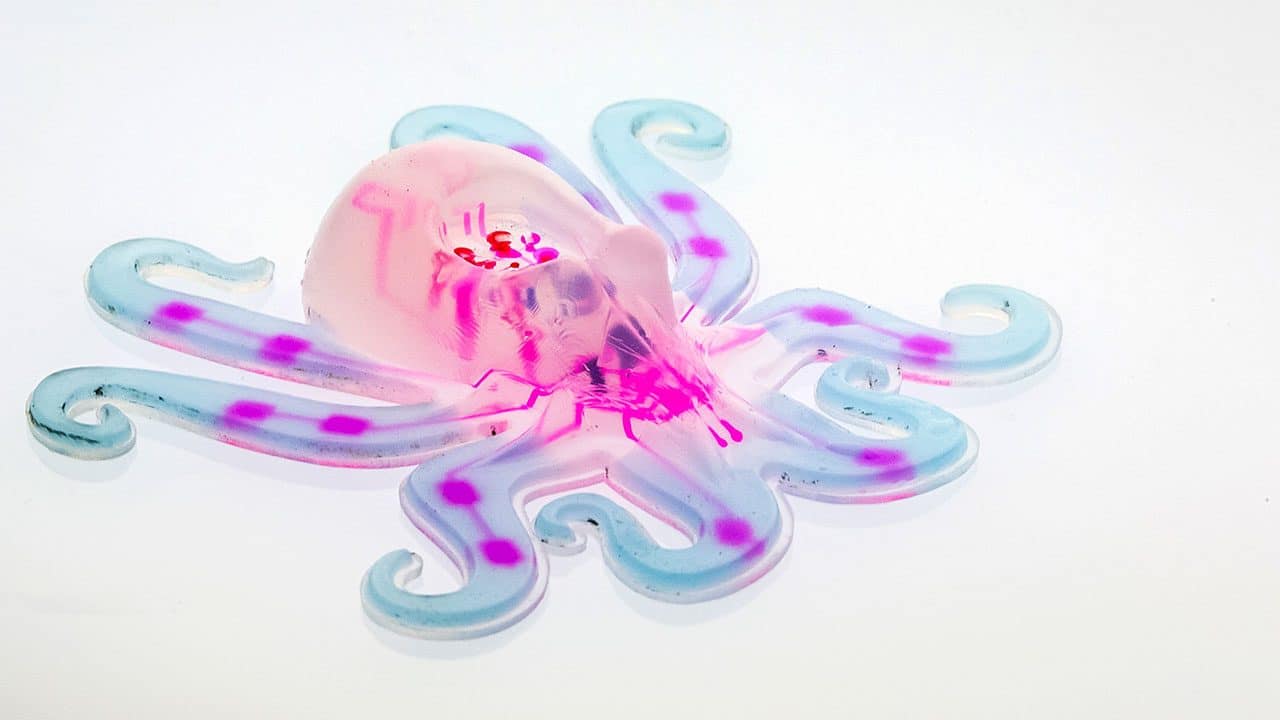 Most of us think of robots as stiffly-moving hard, metal machines bristling with wires and cables. While such devices already improve our everyday lives in numerous ways, their rigidity and lack of “sensitivity” to their surroundings often constrains usefulness.

Driven by a burgeoning demand for lighter, cheaper robots that can handle more complex situations and collaborate directly with humans, pioneering bioinspired designs and soft materials are challenging our notion of what robots should look like, and what they can do.

Johannes Kuehn and Sami Haddadin from Hannover’s Leibniz University are currently working on an artificial nervous system which could be used to make robots experience “painful” sensations. The pair equipped a lightweight robotic arm with a tactile fingertip that measures pressure distribution and temperature to mimic human pain response. The next step is to apply this concept to more complex robots and prosthetic limbs.

“Enabling robots to feel pain will safeguard their own functionality.”

Across the Atlantic, scientists at Harvard University have developed the world’s first completely self-contained soft robot. Named the “octobot,” this eight-limbed creation has no hard electronic components. Instead, its movement relies on an internal pneumatic system powered by hydrogen peroxide. The research team is now hoping to design a version that can crawl, swim and interact with its environment.

The work currently being carried out in Hannover and at Harvard is clearly still at the prototype stage. But it has far-reaching applications. Kuehn explains:

Going forward, the concept of artificial pain sensation and reaction will become vitally important to a growing number of autonomous robotic systems. Enabling such systems to feel pain will safeguard their own functionality.

Imagine an industrial robotic arm coming too close to an extreme heat source. If it is able to feel something akin to human pain, it can move away, in the same way that we instinctively withdraw our hands from flames.

With humans now working alongside a growing number of autonomous systems, robots that are sensitized to pain also could be far safer than their less intelligent counterparts.

Such robots could not only avoid painful collisions with humans and other objects, but would also be able to introspect and understand if any of their systems were dangerously defective. This is, after all, one of the facets of human pain.

The evolution of devices such as the octobot also promises to revolutionize human activity and human-robot interaction. From the healthcare and military sectors to the exploration of space, robots inspired by flexible creatures such as octopuses, caterpillars or fish will increasingly perform tasks that are beyond both rigid robots and humans.

Rolls-Royce, for example, is already testing a soft, snake-like robot that can crawl inside aircraft engines, slashing days off inspection times. A soft robot fish from China’s Zhejiang University is being tested to monitor water salinity, while cephalopod-inspired robotic grippers from Boston-based Soft Robotics are already employed in many factories.