Home » Gemasolar: When the Sun Lights the Night

Gemasolar: When the Sun Lights the Night 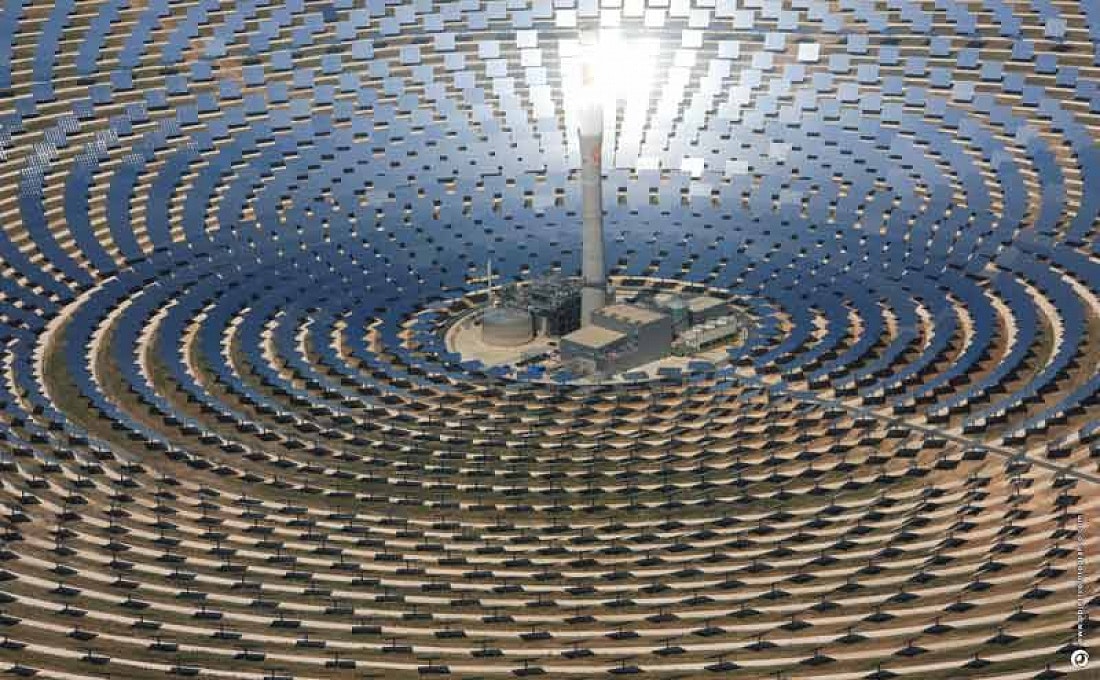 Solar energy is a power source that could replace fossil energy because it is abundant, predictable and free. This promising solution could fill a large percentage of worldwide energy demand.

Producing solar energy all day and during at night was long an unattainable goal. Until Gemasolar’s 2011 breakthrough in Spain.

This 220 million euro concentrated solar power project is paving the way to a new form of power for the future. Operated by Torresol Energy, it is a joint venture between the Spanish engineering group SENER (60% of the shares) and Abu Dhabi-based renewable energy firm Masdar (40%).

Gemasolar is located near Seville in the semi-arid Guadalquivir plain of southern Spain where solar resources are abundant. It is the first solar power plant that concentrates the sun’s rays at a single point, applying an innovative technology at a commercial scale to provide electricity to 25,000 homes, day and night.

Consisting of a 140-meter tower circled by golden mirrors resembling satellites glowing in the sun, the isolated plant is visible from afar.

“This solar plant is unique in the world,” Santiago Arias, retired Torresol Technical Director, told DirectIndustry. “It operates 24 hours a day thanks to a 15-hour storage system. It is able to produce energy without being subject to environmental conditions.”

Gemasolar’s key feature is its ability to concentrate the sun’s rays at a single point and convert the solar radiation into thermal energy using molten salts (sodium and potassium nitrates).

Gemasolar is equipped with 2650 heliostats spread across 185 hectares, the equivalent of 360 football fields. The steel mirrors measuring 110 square meters each are installed all around the central tower.

These mirrors concentrate the radiation. The heliostats continuously follow the position of the sun, adjusting their angle to project the sun’s rays onto the receiver located atop the tower. “The tower receives the reflective light of 300,000 square meters of mirror,” says Arias. “It looks like a star, like another sun on top of the tower.” The receiver can absorb 95% of the radiation.

Using an innovative molten-salt heat storage system, the plant is able to convert solar energy into useful electrical energy even in the absence of solar radiation. How does the system work? The millions of solar beams heat and liquefy the cold salts in a steel tank situated on the ground. They are then pumped to the top of the tower where the temperature rises to 565°C. “When heated, the molten salts produce water vapor that runs a steam turbine and produces electricity in a process that is very similar to a conventional thermosolar power plant.”

In contrast to traditional solar plants, the surplus heat accumulated during the process is stored in the molten-salt hot storage tank. The salts’ physical properties enable them to retain heat. Gemasolar can generate electrical power 24 hours a day, 7 days a week and deliver it as needed. This characteristic is already used in the nuclear sector for maintaining the temperature of reactors.

“Meaning today, if there is no more sun, if there are some clouds at 3 o’clock in the afternoon, the process of producing electricity is not affected. We can continue to generate electricity at the same rate during 15 hours. Unlike other renewable energy plants, Gemasolar is much less subject to variations of environmental conditions to be able to perform.”

Eight thousand metric tons of molten salts are used in the process, most from Europe, some from other locations in Latin America and China.

Gemasolar then sends the power through a high-tension line to the Villanueva del Rey substation in Andalusia, 400 km away, where it is injected into the grid. “We are very well connected with Portugal, with France. So we produce electricity in Spain but the European grid transports the energy to anywhere in Europe. We are also connected with Morocco,” explained Arias.

Gemasolar has been in operation for more than 4 years. The plant guarantees production of 6500 hours of electricity a year, 1.5 to 3 times more than other renewable energies such as the wind or biomass.

With proven results, SENER is now planning to build another plant using the same molten-salt technology in Morocco that will be 7 times bigger. Another project is underway in South Africa.